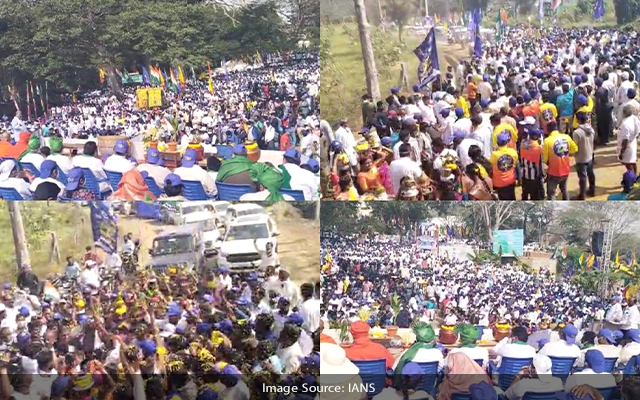 Ramanagar: The Karnataka government on Thursday January 13 began a crackdown on the Congress leaders participating in the Mekedatu padayatra, which has entered its fifth day.

However, Congress MP D.K. Suresh stated on Thursday that the padayatra would continue unabated. Sources said Shivakumar, Siddaramaiah and other senior leaders were holding a meeting at the Ramanagar Party office and will take a final call on future course of action.

The authorities have served notice to state Congress President D.K. Shivakumar asking him not to take part in the padayatra. The notice warns that if he violates the provisions of the Natural Disaster Management Act (NDMA), then action will be taken.

However, Shivakumar refused to accept the notice and the officers pasted the notice on the entrance gate of his residence in Kanakapura.

The Ramanagar Rural police have booked a fourth FIR against Shivakumar, Siddaramaiah, D.K. Suresh and other senior Congress leaders for violating curfew orders.

The police have been stopping the vehicles from entering Ramanagar district to participate in the padayatra from other places since morning. The vehicles with stickers supporting padayatra are being stopped.

Chief Secretary P. Ravikumar has issued prohibitory orders on the padayatra and directed the authorities to prevent it immediately following the wrap by the Karnataka High Court.

But, Congress MP D.K. Suresh stated that the padayatra would continue as planned. “The government has sent the notice signed by an officer who is Corona positive patient to serve the notice to Shivakumar (his elder brother). We didn’t receive the notice in this backdrop. We have to receive the notice after 24 hours. We don’t know what is in the notice,” he said.