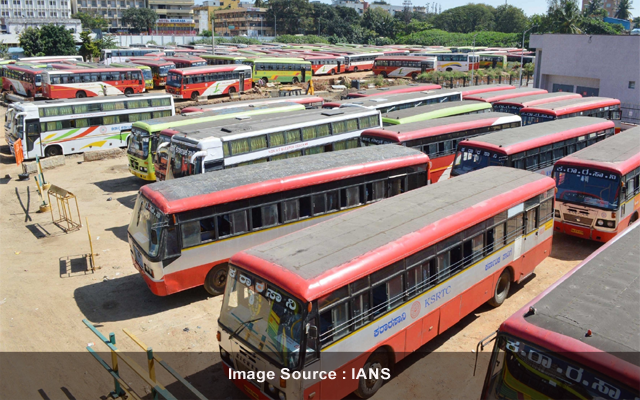 Bengaluru: As many as 10 associations, including the Domestic Workers Rights Union, and the Bengaluru Bus Prayanikara Vedike (Bengaluru Bus Passengers Forum) on Thursday appealed to Karnataka Chief Minister B.S. Yediyurappa and Deputy Chief Minister Laxman Savadi to restart the public transport system at its full capacity as the large workforce, returning to work as lockdown eases, depends on it.

The unions working with labourers and workers of different segment also maintained, in the memorandum, that the second Covid wave and two month long lockdown has only exacerbated the economic crisis faced by the labour class and to ease burden for this class, the icket fare must be fixed at flat rate of Rs 5 and Rs 10 and not more as it will help those who have lost jobs and are deprived of income for the last two months.

The BBVP, which shared the detailed memorandum submitted to both Yediyurappa and Savadi, on its Twitter handle, claimed that not allowing the public transport system to operate in its full capacity is a discriminatory move against aged, domestic workers, garment workers, and people who live in slums.

“We would like to point out that not everyone in the city owns a vehicle for their commute, many do not have the luxury of working from home besides this many live far off from their workplaces, hence, Karnataka should act sympathetically towards such people,” it read.

The memorandum also stated that lockdown measures had been eased from Monday, June 14 and several industries allowed to function with 50 per cent capacity, guidelines allowing those with private vehicles allowed to travel is itself a discriminatory move.

The BBPV also demanded that commuters have to be compensated for the bus pass in April, as it could not be used because of the road transport workers strike across Karnataka.

It noted that prior to the pandemic hitting Bengaluru, BMTC served a commuter base of 35 lakh while Bengaluru Metro Rail covered the ridership base of 4.5 lakh passengers daily.

BMTC is the lifeline of Bengaluru as a large section of city resident, especially the urban poor and the working class, use it.