Bengaluru: VK Sasikala, the close aide of former Tamil Nadu Chief Minister late J. Jayalalithaa who completed her prison term on January 27, will be discharged from the hospital on Sunday, some reports have said.

It can be recalled that Sasikala was admitted to the Victoria Hospital in Bengaluru prior to completing her four-year prison sentence as she had tested positive for COVID-19 after she complained of fever and breathlessness. She was earlier admitted to Bowring and Lady Curzon Hospital on January 20 after falling ill.

According to a report by NDTV, the Bangalore Medical College, in a bulletin, informed that Sasikala has “completed 10 days of treatment today. She has been asymptomatic and maintaining saturation without oxygen since three days. As per protocol, she can be released from hospital”.

The bulletin stated that the doctors attending to her decided that she is “fit for discharge” and will be discharged on January 31. She has been advised to undergo home quarantine, the bulletin added.

It can be recalled that 66-year-old Sasikala was serving a four-year prison term after she was sentenced in 2017 in connection with the ? 66 crore disproportionate assets case in which Jayalalithaa was the prime accused. 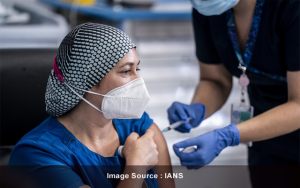