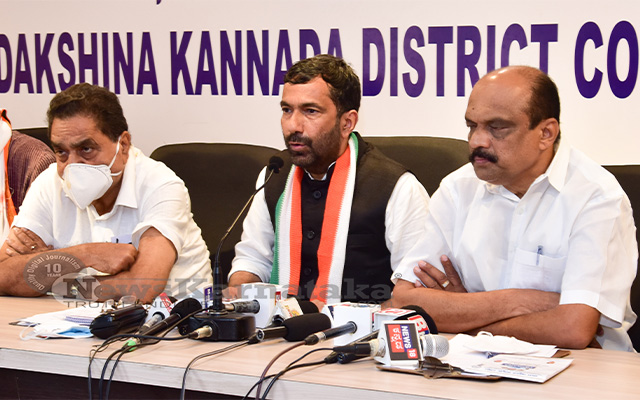 Speaking to media persons on Tuesday July 20, Ahmed said, “On Friday July 23, Surjewala is scheduled to reach Mangaluru and visit Dakshina Kannada, Udupi, Hassan, Chikmagaluru, and Shivamogga districts of the State and hold discussion with 25 leaders of the State. Former Congress MLA and ministers will be taking part in the leaders’ meet. The meet is organised in order to unite the party.” Special focus in the meeting will be on upcoming elections, and failures of the current government as well as hardships faced by the people, he added.

Ahmed alleged that the State Government is hiding the actual Covid death reports in the State only to escape from giving relief fund and said that Congress is already working in order to give justice to the families of the Covid victims. More than 3 lakh people in the State have lost their lives due to Covid. But the government states Covid death to be only 30000. As a relief measure, government has granted only Rs. 1 lakh as compensation that too with several conditions because it has no aim to aid people, said Ahmed and suggested that the government infact should provide with Rs. 5 lakh as compensation. Karnataka Pradesh Congress Committee working president Saleem Ahmed said that the BJP Government in the State is not bothered about people but forever indulged in internal politics and playing games to bring down Chief Minister B. S. Yediyurappa from power.

Ahmed said that the BJP High Command has no trust on the Chief Minister and members of BJP too are pointing out their leader’s fault. Nothing came out despite BJP leader Arun Singh’s visit to the State, he added.

He expressed his annoyance at the state of affairs and added, ‘should Yediyurappa ‘quit or continue’ is the only discussion. They are not bothered about the life of the people. BJP indeed is a unworthy government, Ahmed asserted.