Mangaluru: “The ability to communicate in English is not required for Science; rather, it is a mindset. The majority of scientific discoveries are made in English. Each discovery must be communicated to the layman in his or her mother tongue, said “DRDO DEBEL Director Dr. T. M. Kotresh in a video message sent for the inaugural ceremony of 16th Karnataka Science Congress.

Addressing the gathering he said, “The emphasis given to mother tongue in New National Education Policy is a welcoming step. The number of scientific writers in Kannada should increase and most importantly the essence of the content when told in mother tongue should not be lost.”

Jithakamananda Swamiji, President of Ramakriahna Matha explained on how rich India is. “Our nation has stunning scientific discoveries and these should reach common man and children. They too should be proud of our nation. Forgetting our ancestors is the way to our destruction,” he warned.

Dr. Ashwath Narayan, Minister of Science and Technology, Higher Education and Information Technology, said that, “Science is a part of our heritage. Like religion, Science too was developed by our sages. Science explained in mother tongue is a priceless gift. The programme should reach through various colleges and universities. Government is ready to assist in this regard.”

Prof. Subrahmanya Yadapadithaya, Vice Chancellor in his presidential address recalled K. I Vasu, founder of Swadeshi Vijnana Andolana and stated “Science and spirituality are blended together and both are essential for our life.”

Floral tribute was given to Sir. M. Visvesvaraya’s portrait to mark his 161th birth anniversary, which is celebrated as Engineers’ Day. 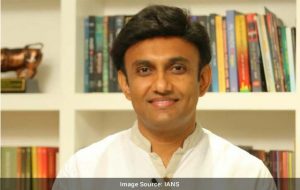