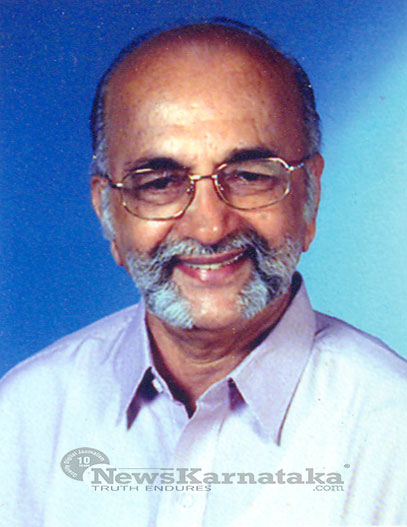 KARKALA GOVINDA SHENOY (86), former Chief Manager of Syndicate Bank, passed away on Tuesday, 3rd August 2021 at his residence ‘Laxmi Vaman’, Warehouse Road, Mangalore following age-related illness. He is survived by his wife Tara Shenoy, two daughters Sangeetha Pai and Preethi Nayak, and a son Damodar Shenoy. His eldest son Dr Manjunath Shenoy had predeceased him. Due to Covid protocols, his last rites were performed in the presence of only immediate family members at Boloor Crematorium, Mangalore at 4:00 pm.

Popularly known as ‘K G Shenoy’, he was born on 23rd September 1934 at Agumbe and graduated (B.A. Hons) from Maharaja’s College, University of Mysore.  He joined Syndicate Bank in July 1959 and retired from the bank in March 1990 at Manipal as Chief Manager. During his banking career, he had headed the Industrial Finance Department of the bank at Mumbai and was the Secretary of the bank’s Local Loans Committee at Mumbai. He had participated in training programmes in Small Industries at Hyderabad, Secretarial Practice at the Institute of Secretaries and Banking Practice with Reserve Bank of India and National Institute of Bank Management (NIBM).

Basically hailing from a family of passenger transport fleet operators, KG Shenoy had a lifelong association with the automobile industry of the region. The Motor Gadi Transport Service (MGTS), a well-known firm founded by his late father, Sri Appu Rao alias Manjunath Shenoy in Shimoga District, was the pioneer in this field in the Agumbe Ghat Section. After retiring from Syndicate Bank, he joined Arvind Motors, Mangalore in 1992 as Sales Manager. From 1999, he was associated with Maroor Agencies as their Honorary Advisor.

Since 1992, he has been actively associated with Dakshina Kannada Automobile & Tyre Dealers Association for nearly three decades, serving first as the association’s Vice President and later as its Patron. When the Association decided to have its own building ‘Auto Bhavan’ at Maroli, KG Shenoy spearheaded the building project which was completed in March 2011. He was also the Editor of the Association’s quarterly newsletter ‘Auto Sandesh’ and its annual souvenir. He was actively involved in the formation of the Federation of Karnataka Automobile and Allied Industries Associations in Bangalore in 1999 and was unanimously chosen as its President for two years from 2003 to 2005. He also enjoyed a very good rapport with the Federation of All India Automobile Spare Parts Dealers Associations (FAIASPDA), New Delhi.

In recognition of his exemplary service to the automobile and auto spares industry, Dakshina Kannada Automobile & Tyre Dealers Association had honoured him with the ‘Outstanding Contribution Award’ during its Annual General Meeting on 26th Day of October 2013.

Dakshina Kannada Automobile & Tyre Dealers Association has condoled the demise of KG Shenoy. “In the sad demise of K G Shenoy, we have lost our mentor, guide and a most active personality who has built our Association stronger over the last three decades,” said Kasturi Prabhakar Pai, the Association President in a statement

K G Shenoy was the President Elect of the Rotary Club of Mangalore North during 1981 and President of Rotary Club of Vishakhapatnam Main during 1987-88. He has widely travelled in India and abroad, having visited Sri Lanka, Hawaii, USA, Canada, Thailand, Malaysia and Singapore.