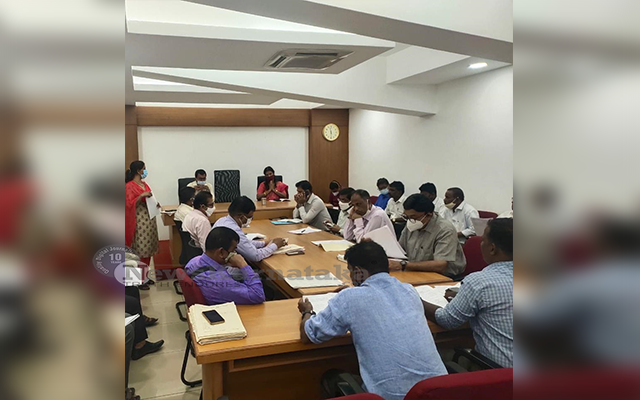 Mangaluru: A meeting in the presence of Mangaluru City Corporation Commissioner Akshy Shridhar and Deputy Mayor Sumangala Rao was held on Tuesday December 21 at the Corporation Committee Hall on the difficulties faced by SC/ST leaders.

Citizens belonging to SC/ST community are being given Rs 3 lakh towards the construction of their houses under 24.10 Percent Plan. Currently the price of raw materials necessary for the construction of houses has hiked and resulted in difficulties for the SC/ST citizens. Based on this, a request was placed to increase the allocated grant.

In response to this, the Corporation will write to the Government to increase the grant sum to Rs. 7 lakh and procure approval from the Cabinet for the same.

As per the government order, SC/ST community has been given reservation to procure tenders for projects under Rs 50 lakh. However, SC/ST contractors have been getting the work done through contractors of other parties, which is taking away the opportunity of bidding for potential SC/ST contractors. A complaint on the same was heard, based on which an investigation committee under Deputy Commissioner (Administration) has been created to check projects taken up in the past two years under the reservation scheme and completed by other parties or those with false certificates. Necessary action will be taken against such members, the meeting ruled.

It was suggested that all sanitation workers involved in cleaning and sanitation works be provided with quality equipment and protective gears. A request to place water purifiers in all ward officers for the use of sanitation workers was put forward, along with gradual development of basic infrastructure.

It was mentioned that no committee has been created yet to look after the maintenance and development of Dr. B. R. Ambedkar Bhavan near Urwa Store nor have any permissions been granted to host programmes at the said venue. In response to this, the Public Welfare Department responded that the constitution of the committee was in its final stages, after which suitable pricing will be allocated for the use of the hall by the community.

The members of other communities have encroached the DC Manna lands near Urwa Store and Sunkadakatte that come under Corporation limits. Several complaints have been filed on the same subject and the areas have not been cleared. The Corporation has responded that the Assistant Commissioner has been requested to take necessary action and will be sent a letter as a reminder of the same.

The Executive Engineer has been directed to resolve issues regarding drinking water supply and sewers in areas where members of the SC/ST community reside.

Several SC/ST leaders and officers from different divisions of the corporation were present.