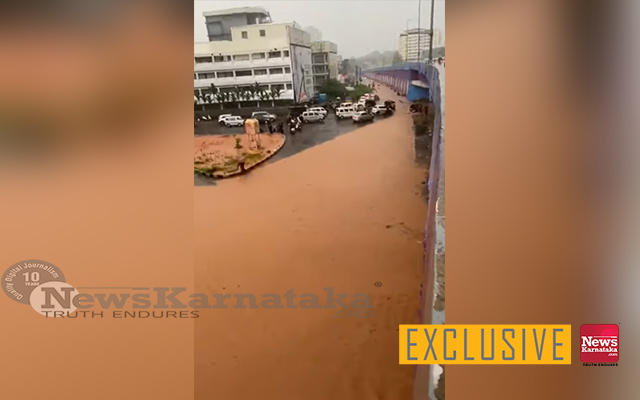 Mangaluru:  A DISHA review meeting was held on Sunday July 18 to discuss the waterlogging in NH 66 at Pumpwell circle. The meeting was chaired by MP Nalin Kumar Kateel. In the meeting, Project Director of National Highway Authority of India (NHAI) Shishu Mohan made a statement that the media had been exaggerating the flooding issue. He claimed that there was no waterlogging at Kottara Circle, Pumpwell and Thokkotu and that “Small water puddles were projected in a big way by media.”

Speaking to News Karnataka MCC Commissioner Akshy Sridhar said, “I visited the place along with NHAI officials. In Pumpwell, a road has a downward slope in one place, which is directly towards the junction. So, during the drain’s construction, they could have included a preference chamber for the water to pass through, but they didn’t. We have asked them to do it but nothing has been done. Now corporation will take it up. When the rains subside in the coming days, we’ll just try to build a chamber and drain the water through the drain water sewage.”

When asked about the statement made by Shishu Mohan, Akshy said that, “The remark has been made by NHAI and MCC is nowhere related to it.”

According to Deputy Commissioner Rajendra K. V, the waterlogging is causing problems for motorists who drive through the junction at night when there are no streetlights. He also stated that it is the responsibility of the NHAI to keep the city’s highways in good condition. As a result, he announced the formation of a joint team of officials from the National Highways Authority of India (NHAI), the Mangaluru City Corporation (MCC), and other local bodies to address the situation.