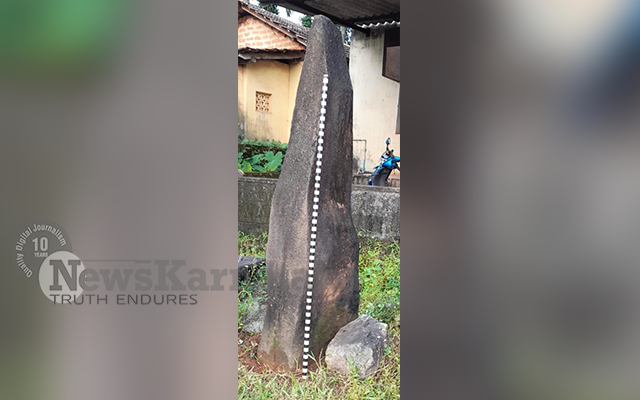 Udupi: A typical menhir was discovered in Basrur, which is considered as a medieval historical city of the west coast of India. The huge stone slab is about 7 feet in height from ground level. The local legends associated with these menhirs, mentioned them as pregnancy stones. But it is not known whether they built in memory of deceased progeny or not. The menhir found at Basrur oriented in the north-west direction and is slightly leaning to the east.

Basure or Basiru means pregnant in Kannada. Basrur is a medieval trading city of Coastal Karnataka, known by various names like, Basurepattana, Basurepura, Vasupura, Basaruru and studded by many temples as a mark of its splendid wealth. Devi temple of Basrur has a special importance. It is the only temple in India where the feast of Devi is performed once in every 60 years. Mahalingeshwara temple, Venkataramana temple, Kote Anjaneya temple, Tuluveshwara temple, Devi temple, Ramachandra temple, Umamaheshwara temple, Bhairava temple, Garadi, Sadananda Mutt are just a few surviving examples of its glorious past.

The menhirs are upright standing stones of Megalithic period. They erected above the burial or near the burial as a memorial stone of the dead. They elsewhere dated between 1000 B.C. to 800 B.C. The discovery of a menhir near Venkataramana temple at Basrur is pushed back its antiquity to the Megalithic period about 1000 B.C. Stylistic Menhir of Basrur has a close similarity with that of menhirs of Baise and Nilskal of the Shivamogga district, says Prof. Murugeshi T, Associate Professor, Dept of Ancient History and Archaeology MSRS college, Shirva.

“I am thankful to Muralidhar hegade, Pradeep Basruru,  Basruru Venkataramana Temple trustees for their kind service and help and my students of archaeology, Shreyas, Gowtham, Nagaraj, Karthik and Chandru participated in this discovery,” he said. 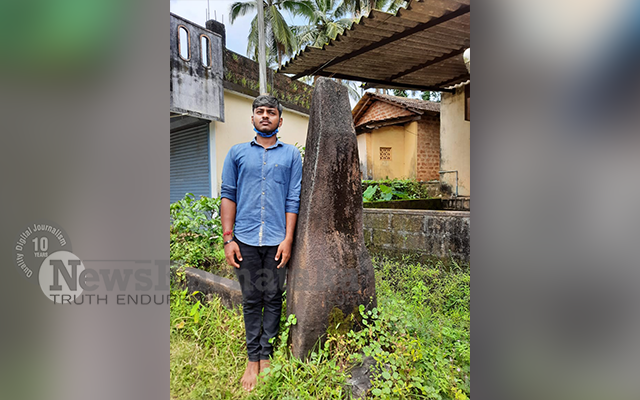