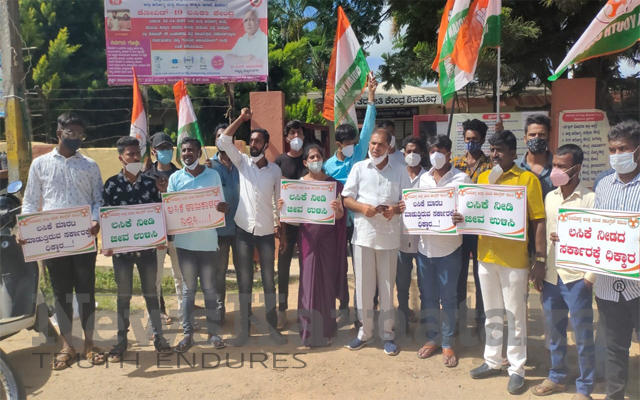 Shivamogga: The District Congress held protest on Tuesday June 29 in various areas of the town opposing shortage of vaccines. The protest comes in the wake of non-availability of vaccines in the town for past three days.

District Congress President Sundaresh alleged that the BJP is playing politics in the name of vaccine. He made an allegation that in order provide for private medical institutions, the State Government is cheating public off vaccination. He demanded to stop this political play immediately.

Further, he called upon the government to immediately distribute vaccines properly, if not tender resignation.

Even District Youth Congress members too held a protest at the DHTC. Further, National Students’ Union of India members protested in front of the Triad Centre, and Municipality member H. C. Yogesh led protest was held at the Primary Health Centre near the Auto Complex in the town.