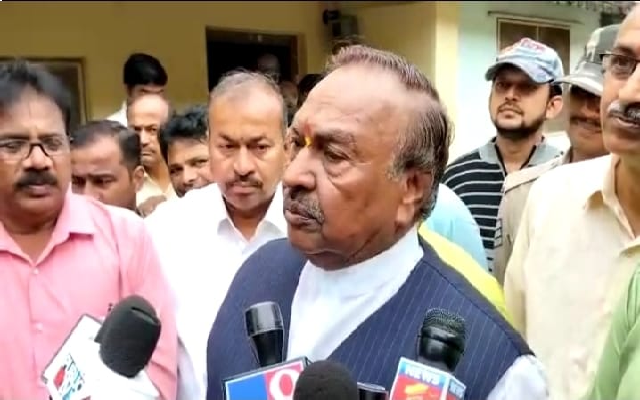 Shivamogga: Rural Development and Panchayat Raj Minister K. S. Eshwarappa said that the people of Hanagal were kind, and thus gave a lease of life to a dying Congress.

Speaking to reporters here on Wednesday November 3 here, Eshwarappa said that Congressmen have fought elections on the basis of caste, obscenity and appeasing Muslims. However, we have gone to the polls on the merits of Modi-led administration and the development works undertaken by Former Chief Minister B. S. Yediyurappa and Chief Minister Basavaraj Bommai’s in the State. Similarly, we have won with majority beyond expected in Sindagi while we lost unexpectedly on Hanagal. We will introspect this, and in the coming days will win all over the State. We will come to power in 2023 again, he expressed confidence.

Responding to Siddaramaiah’s tweet that there will be a tsunami in the coming days, he said Congressmen have already been washed away by tsunami. Siddaramaiah himself had been defeated in his own constituency, and thus it is funny how he is taking on Bommai for losing in his own region, said Eshwarappa.

Talking about JD (S) losing deposit, he said that regional parties have no place in our country. He said even Congress is now slowly becoming a regional party.

Responding to the CM’s defeat in the district, he said a single defeat does not become a deciding factor in politics.