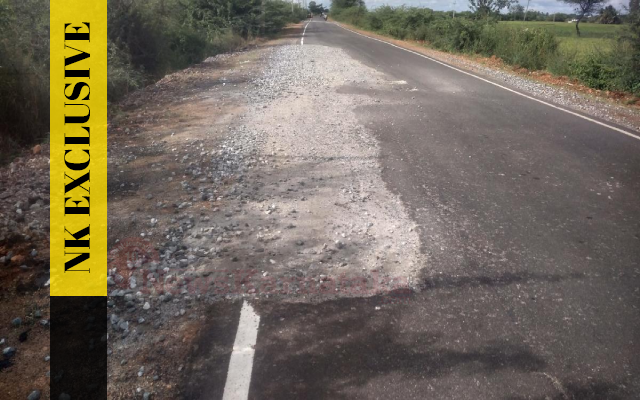 Chamarajanagara: The road at Santhemaralli that was tarred just a month back has now been ridden with potholes.

This road connects Santhemaralli to Muguru cross, and was tarred just before the visit of President of India Ramnath Kovind and Chief Minister Basavaraj Bommai  on October 7. The dignitories had arrived to inaugurate Hi-tech Medical College Hospital. At the time, the villagers even expressed doubts about quality of work as officials had completed the works, hurriedly.

As per doubts of the villagers, the tarring layer now has completely come out, and the road is ridden with potholes standing in a dilapidated condition.

Public Works Department  Assistant Engineer Satish told that the work earlier was taken up hurriedly as the grants were not released. However, he assured that the works will be completed soon after tender process concludes.