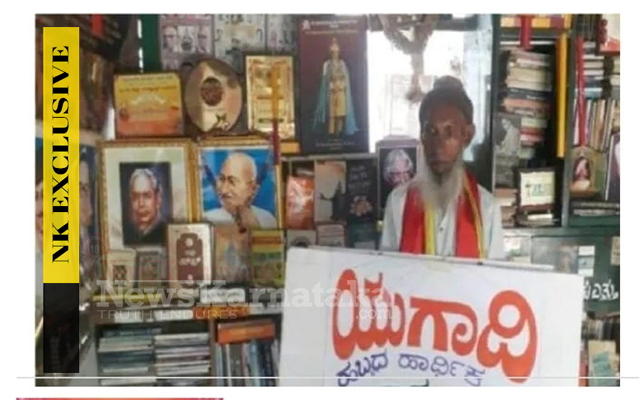 Mysuru: Rajiv Nagar resident Syed Isaak (63) in the City is still waiting for library building to be constructed  by State Government since last six months.

Isaak was running a library since many years at Rajiv Nagar. However, on April 8 Syed Isaac’s library was gutted in fire mysteriously.  Isaak a lover of Kannada was in the habit of reading which led him to open a library to serve book lovers.

His library attracted hundreds of book lovers as Isaac bought at least 20 news papers daily for readers. Every year he celebrated Kannada Rajyotsava on November 1 like a festival.

The news of library being burnt down becMe headlines in media. Many pro-people organisations, people from across the country even abroad have now lent helping hand to reconstruct library. The Mysuru Urban Development Authority officials provided a site to construct library. Even MCC announced construction of a library at an estimated cost of Rs. 35 lakh.

Speaking to News Karnataka on Tuesday October 19, Isaac expressed his sorrow as the authorities have forgotten to construct library. He said he has received books from Gulf,  America, Austalia and Europe countries but does not have space to keep it safe as he residing in a 15×20 house.

The Political Science Department head of Mysuru University Muzaffar Assadi  has managed to collect 5000 plus books from all over the country through crowd funding. His chamber is filled with books and is now running out of space as books are pouring in.

When contacted District  Library Department Deputy Director  B. Manjunath said that Library Department would provide all furnitures if authorities will construct a library. He said that the then DC and Mysuru City’ Corporation commissioner has promised to construct library building but soon both got transferred. Now MUDA authorities say that they would provide land for construction and but cannot construct a building. MCC authorities are yet to respond to the appeal of  Isaac.

It was Mysuru Infosys techies who collected Rs. 35 lakh through donations to construct building but later it was given back to donors after the government announced that it would take up construction. Now  this Kannadiga is waiting helplessly for the construction of his dream library.