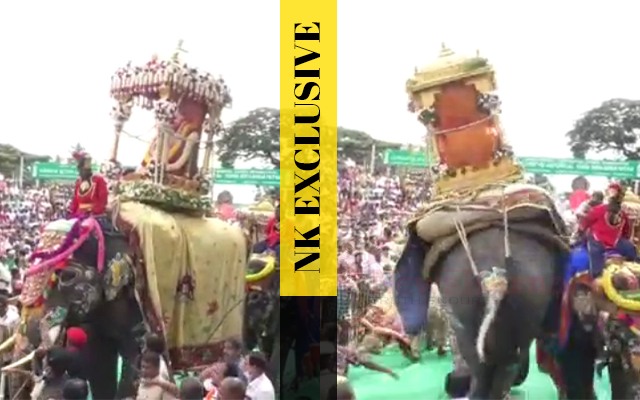 Mandya: The elephant carrying wooden Howdah was frightened by the sound of crackers during Dasara Jambu Savari procession in Srirangapattana near here on Saturday October 9.

People began bursting crackers in a matter of seconds. Crackers and loud speakers frightened the elephant Gopalaswamy, who was carrying Chamundeshwari idol in a wooden Howdah. The people ran helter-skelter. The mahout controlled the elephant before it tried to run amok, averting a major tragedy.

The officials then cancelled the elephant’s Jambu Savari and took out a procession in a silver chariot. The elephant Gopalaswamy was also frightened during canon firing rehearsal at Mysuru palace premises. District In-Charge Minister Gowda gave Rs. 3000 cash prize to mahout who controlled the elephant.