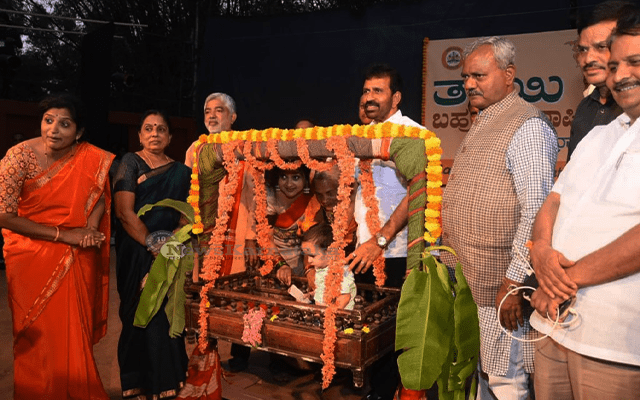 The annual National Theatre Festival Bahuroopi -2022 was inaugurated at Vanaranga by Padma Shree environmentalist Tulasi Gowda by moving the cradle in the backdrop of Lali Haadu, denoting motherhood.

Sandalwood actress Malavika Avinash said “I had a close association with Prema Karanth and B. V. Karanth couple. Prema Karanth was a family member who directed the play “Nakkala Rajakumari” which was my first play and was made into a film also, with music by B. V. Karanth.”

Malavika quoted the theme of motherhood and she elaborated references from Rigveda, Upanishath and Indian culture with strong links with motherhood. Malavika referred to Kannada poets and their poetry about mothers.

District Minister S. T. Somashekar said “After a gap of so many days, Mysuru is witnessing a mega event. Rangayana is a theatre hub and we encourage the theatre activities.” Hundreds of people including theatre enthusiasts thronged the repertory of different languages to watch them.

Beginning March 13, ‘Bahuroopi 2022’ is all set to entertain theatre enthusiasts up to March 20. A total of 34 plays in 11 languages and international films will entertain theatre buffs. District Minister S. T. Somashekar also released the Bahuroopi media bulletin and handbook of the National theatre festival.

See also  Universities will be set up in all districts: K'taka Minister