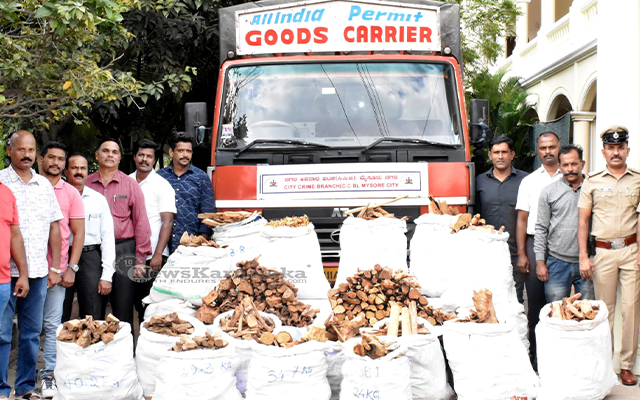 Mysuru: In a big haul, the City Crime Branch (CCB) police has busted a sandalwood smuggling racket and seized 700 kg of logs worth Rs. 1 crore. The gang has been working in the City in a very professional manner, which has startled even CCB sleuths.

In this case, two people were arrested, and the vehicle, two cellphones, and Rs. 15,000 in cash were seized. When the police investigated the vehicle, the wooden logs were stored in a container behind the driver’s cabin by a goods carrier with a Maharashtra registration number.

The wooden logs were collected from a smuggler and was loaded towards Bengaluru when the police stopped the vehicle at the intersection of the second cross of Pulikeshi road and MKDK road in Mandi Mohalla on Monday at 11.00 pm. The search is on for the smuggler and the buyer and others involved in the racket.

DCP Geetha Prasanna told that the prime accused called the accused to drive the lorry to the destination. Another accused brings a lorry to the circle. Then they transport the vehicle to a specified place for selling. The prime accused used 8 to 10 sim cards and the workers working under him never saw his face or knew who he was. She said police searching for the prime accused and from Bengaluru where it going.