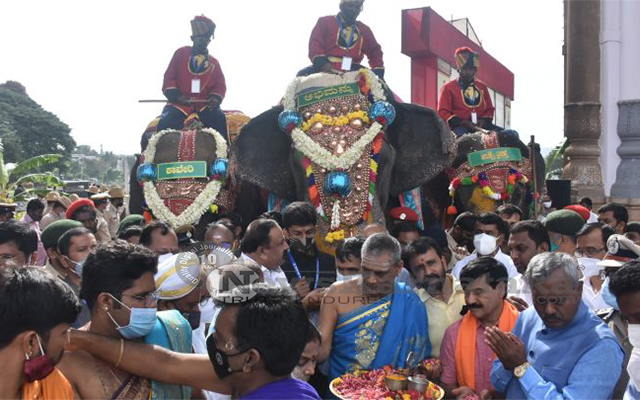 The Dasara jumbos arrived in Mysuru from Veeranahosalli on September 13 and were camping at Aranya Bhavan. The jumbos are spearheaded by captain Abhimanyu. They were given a grand welcome at Marthanda Gate. District In-charge Minister S. T. Somashekar offered puja to elephants. Chief priest Dr. Shashishekar Dikshit also performed traditional puja to the elephants and they were offered sugarcane, jaggery and coconut.

The hustle and bustle seemed to bother Ashwathama, who will be participating in Dasara festivities for the first time. It took some time for the mahout and kavadis to bring him under control.

Speaking to media persons, District In-Charge Minister S. T.  Somashekar said, “On October 7, Dasara inauguration will be held though the name of the inaugurator is yet to be announced.  After the Assembly session, the name will be announced.” He said Chief Minister Basavaraj Bommai will choose the inaugurator. “We can suggest names but the final decision will be given by the Chief Minister,” he added.