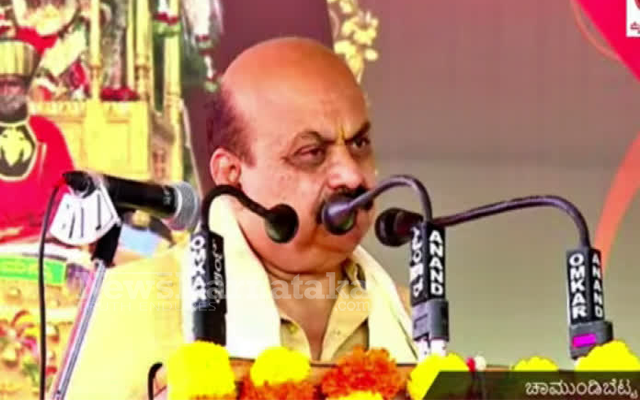 Mysuru: The BJP government in Karnataka is determined to give clean, able, and pro-people governance, said Chief Minister Basavaraj Bommai during the inauguration of Mysuru Dasara 2021 here on Thursday.

Addressing the gathering at the inaugural function of Dasara  Bommai said, “Inaugurator S M Krishna was of the opinion that Dasara should be remembered internationally.  Many other countries offer package tourism to popularise their festivals. Even we want to plan something on these lines to give Dasara a different dimension.”

The Chief Minister said, when I was Water Resources Minister, I had come to see KRS Reservoir. There was some leakage. As the gates of the reservoir were old, we have replaced them. There are 14 reservoirs that need repair. 11 reservoirs have been upgraded. We are happy to be in a position to serve people.  Despite the challenges and financial constraints, we want the state to progress.”

Bommai said, “We want to bring in a lot of changes on the road to development. Mysuru needs an airport of international standards and we are working on those lines. I have prayed to Goddess Chamundeshwari to give us strength to overcome hurdles.”

The BJP leader said, “One man can’t do everything and our government believes in teamwork. We will try to improve the state’s financial condition and take up pro-people works. We are offering scholarships to farmers’ children. We have launched CM Dashboard so that we can review various projects time and again.”

He said, “Due to the pandemic situation in the last two years, we are having simple Dasara. Hopefully, we should have a grand Mysuru Dasara next year.  This festival should inspire people to do better things. Farmers should get the right price for their crops. Only when people live happily, the real meaning of Dasara is achieved.”

He said, “All those who inaugurated Dasara festival over the years are big achievers and have contributed a lot to the development of the state. Our senior leader Krishna is also a tall figure in the country. All the people are happy that we have invited him to inaugurate Dasara.