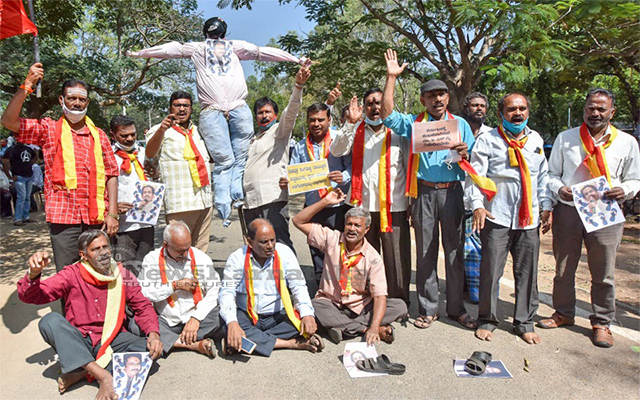 Mysuru: The Karnataka  Rakshana Vedike Swabhimani faction and the Karnataka  Sena Pade workers staged a protest in front of the  Deputy Commissioner’s Office on Monday December 20 demanding the arrest of those who desecrated the statue of Sangolli Rayanna and to ban Maharashtra Ekikaran Samiti (MES).

Prasanna Kumar, President of Karnataka Rakshana Vedike District Unit said that if the government does not punish the accused who desecrated the statue of Rayanna and does not ban MES, the workers would stage severe protest against the State Government too.

The activists burnt effigy of MES.

Prasanna said that MES is testing patience of Kannadigas. The activists  demanded immediate ban of MES.