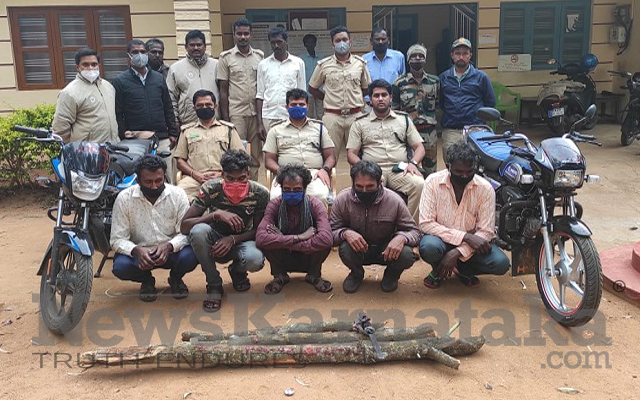 Mysuru: Five men accused of illegal transportation of Sandalwood have been taken into custody here on Saturday July 9. The culprits were caught red-handed in the raid undertaken and around 20kg of Sandalwood pieces, a two-wheeler and equipment used for the crime were seized.

The arrested are identified as Sheikh Riyaz, Siraj Beg, Bharath from Anandnagar here Somesh from Lakshmipura and Shivappa, Kubbakallarahalli, Ramanagara district. They are accused of being involved in cutting down the sandalwood tree and transporting it, escaping the surveillance of Forest Department staff.

The sandalwood tree grown in the forest area of Nilavaadi village of Koppa Social Forest was cut down and arrangements had been made by the accused to illegally transport them.