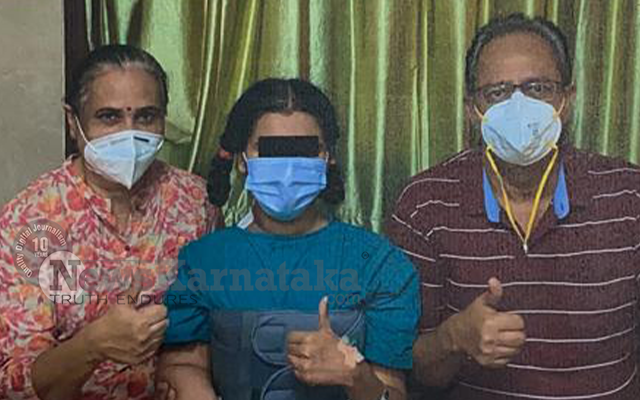 Mangaluru: For the first time in India, major resection of right chest with part of lung and reconstruction was carried out by Department of Surgical oncology at Yenepoya medical college hospital for recurrent chest wall tumor in young patient which lasted for more than 13 hours.

For this deformity she underwent 6 surgeries at Coimbatore. She developed cancer in June 2019 for which surgery was done two times at Ganga hospital. For same cancer in 2021 she was operated at MVR hospital, Calicut and Radiation was given. The tumor recurred again for which MVR hospital ,Calicut were not willing to treat further and patient was referred to TATA Memorial Hospital ,Mumbai. At TATA also they informed surgery was not possible and sent her back as it’s a major and challenging surgery as right half of chest along with part of right lung has to be removed and reconstructed, which may lead to death of young patient as it has not been done till now.

The family of the patient, through media and friend, referred to Dr Jalaluddin Akbar, Head of the Surgical Oncology Department, Yenepoya Medical College and Hospital, Derlakatte, Mangaluru. The patient and her family came to Yenepoya as their last ray of hope and consulted the Yenepoya Surgical Oncology team. Taking up this case was not an easy decision as the cancer has involved right chest and part of lung and was previously treated with surgery and radiation. After a thorough evaluation and discussing the case in Tumor Board, a decision was made to operate. She underwent complete removal of tumor along with 9 ribs and part of right lung and chest wall reconstruction was done with Dual Mesh and Titanium plates (in place of Ribs) on August 31, 2021.

The Surgery went well and the post operative recovery was stormy, but she recovered due to good ICU facility. She is able to do the daily routine activities and was discharged.

Challenges during the surgery: