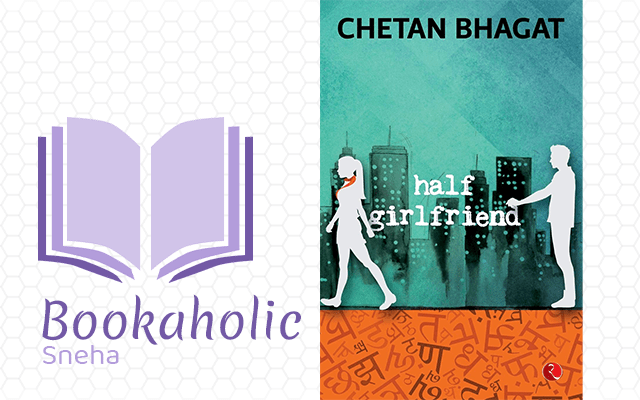 I had heard that Chetan Bhagat was a good writer and thus started reading his novels. Now coming to his novel, Half Girlfriend, the story revolves around a poor boy going from village to city to study and meeting a rich girl with whom he eventually falls in love with. The author gradually describes the couple’s relationship and other conflicts in their life.

The way he describes the characters through words gave me an insight into the situation the characters were in. Simple words have been cleverly chosen to gain a wide range of audiences around the world. The setting of the novel and character description led me to complete the book in one night.

From the time you begin to read this book you start empathising with the feelings of Madhav and Ria. No matter how many books I will read, this will remain at the top of my list of favourite books.

Coming to the story, this is the story of a Bihari boy who gets admission in St. Stephen’s through sports quota. It is here that he falls in love with a girl named Ria Somani. She plays basketball and the two meet at the practice, where they become good friends.  However, Madhav loves Ria, and he expresses his feelings to her but she tells him that I feel more than a friend for you but I can’t be your girlfriend but I can be your “half girlfriend.”

A year later, Ria gets married to her childhood friend Rohan and settles down in London where Rohan owns a big business. Delhi becomes unbearable for Madhav as he is not in touch with Ria, and hence he settles down in his hometown and helps his mother.

Soon as the fate would have it, they meet again in Patna and he takes her to his village but his mother does not like her and asks Ria to leave. Soon he realises that she is in love with him but because of his mother’s behaviour she could not express her feelings to him. He starts looking for her but he is unsuccessful in finding her. That is when he remembers that she had told him long ago that she wanted to be a bar singer at New York. He soon moves to New York and starts looking for her. At last he finds her at a bar after three years.

The duo look at each other while Ria was singing a an intense song, and it happens to minus 1 degree celsius outside. Without a delay, Madhav goes up to her and asks her if he could marry Miss Ria Somani and she agrees. They hug each other, and they agreed and this is where the story has a happy ending.