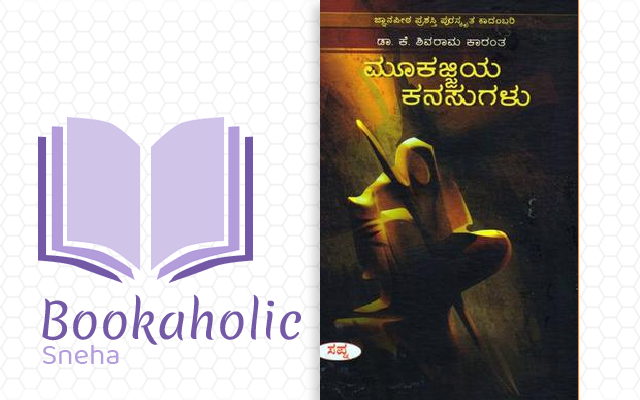 ‘Mookajjiya Kanasugalu’ (Dreams of Mookajji) is a novel written by renowned Kannada writer Shivaram Karanth in 1968, and this won Jnanapitha Award for writer Karanth in 1977. This novel talks about the thought process of today’s man. It talks about faith and origin of culture.

The name of the novel itself is interesting. Though as a novelist Karanth has not stated any character as a prominent one, the main characters of this novel is a grandmother and her grandson. The grandson represents every person who doubts superstitions and the cultural origin. The grandmother in this novel has the ability to dream about past and the future. The novel represents our faith. The character etching of grandmother is such that she tries to bring our true faith into fore.

The story is set in Mooduru Village, and revolves around two characters, the grandmother, and her grandson Subbaraya. Mookajji, the grandmother is a 80 years old widow, who lost her husband when she was just ten.

The character Subbaraya instead of reading novels that fail to depict the reality prefers listening to stories from his grandmother. He find the stories very interesting. He goes to his grandmother with every subject possible/situation possible, and tries look into reality of the situation. Subbaraya feels that the answers of the grandmother for Subbaraya’s queries on various topics too are equally attractive and real. Though set in a village, the writer makes the character Subbaraya ask questions in God, culture, faith, progress and other social problems.

The female lead of the novel, Mookajji tells her grandson her dreams which are mostly on God, and social development of human beings. There are other minor characters in the novel who impose their immature faith on to others. Therefore, this novel effectively brings out many distressed voices which the current generation is not aware of on its pages.