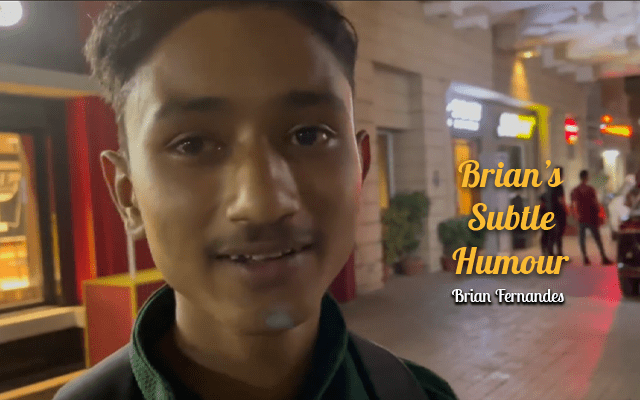 Within 12 hours of being aired, a video made by Film Maker Vinod Khapri became the new must open and view File! And believe me it’s not even about those topics and plots we love – genocide, infanticide, pesticide, regicide or even fratricide, now a more common incidence than genocide, but about how you must decide what you want to do with your life! It’s the Noida File!

The video is about a young man from Noida, Uttar Pradesh, Pradeep Mehra, who works as an employee at a McDonald’s outlet. Khapri drives alongside as the 19-year-old runs home – a 10 km run – at midnight after his shift at a McDonalds outlet.  He refuses a lift… and dinner offered by the filmmaker for a reason that sets the video and viewers alight. “If you hear the reason, you will fall in love with this kid,” Khapri tweeted while sharing a video of the interaction on Twitter.  indeed you will fall in love!

It’s a must watch, and that is why so many must have watched it! Indeed, without fanfare, pre-release despair, or post release in-your-face, shove and push by celebrities et al, the video, in the first 12 hours after its release, garnered over 3.8 million views, crossed 153,000 likes, and began trending on Twitter. The eyeballs continue to swell!

Ophthalmologically though, there is no cause for concern, because it a sight for sore eyes caused by other files on the front burner! Physiologically and emotionally its impact is all positive. With or without the virus in its DNA, it is now viral.  In fact, all other files have reason to feel jealous – after all they literally had to call upon people to open them even giving bureaucrats an afternoon off to do so! Bureaucrats are, is well known, averse to opening files. Wonder if that amounts to conversion by fraudulent means!

The Noida file left all other files behind in the number of times it was opened, viewed and approved, including those that sit on the desks of the nearly 2.8 crore central and state government employees – Of course not all of them have files on their desks, some just push it quickly to the next desk in line – the files will still have miles to go though, before they can reach the crest and see the light of day, if that is still an option by then, given how our climate is changing!

Files generally have a lot in common with their custodians – they gather dust and develop piles both literally and figuratively speaking, until someone gets a reason to disfigure the pile, pick one, open it and celebrate what’s in it – like a file clearance drive (imagine that- it’s a phrase used by retail garment shop for garments that nobody touches, nobody wants to, until the clearance drive), an approaching election, a  court mandated or  Naxal induced vaccination, or a simple infusion of Saccharin, a common sweetener!

But not this file – The Noida file is a must watch (Watch it here ) and that is why a multitude must have watched it. I see a couple of reasons for this – for one, it is about the ordinary who does the extraordinary – focussing on a future goal while not despising his  present circumstances (Circumstances he has in common with three fourth of our population), compassion for other human beings (that is drowning quickly in a hate quicksand), and second and most importantly not taking things for granted (but consistently and continuously working towards his goal), nor taking the easy way out when such an opportunity presented itself (like we do with our fitness and new year resolutions!). Pradeep Mehra’s simplicity, humility, sincerity, and his dedication to his goal will give you goose bumps and if it can bump you in the same direction, it will have achieved its purpose.

I don’t want to play a plot spoiler but the gist of it is that Pradeep runs home every night after his shift to practice for selection into the army. He refuses a dinner offer, because he has to cook for his brother who has to go to work.  He refuses a lift, because that would mean skipping his training which might have a negative impact on achievement of his goal.  Certainly, worthy of a Padma Award for thought process alone.

Other young men, other old men too, like you and me, would have done exactly the opposite of what he had done – grabbed the offer for a ride and dinner with a famous filmmaker and posted it on social media! Can always take up the baton another day, can’t we?

Some files, but not this one, prompt calls for personal security to be provided to those who write them. Of course, it’s always the truth about lies. Then Y security you may ask. Because it is necessary – when you cause fear, you fear – old phantom saying!

Imagine the secrets in the Piles of Files lying on desks all around the country. What if they were to whisper to each other? it would sound like a loud roar; and the competent authority, incompetent until now, would wake up and either promote it, or ban it – the naughty file that started it all!  It can be sent up for approval of the competent authority (a favourite phrase among bureaucrats) on a as is or nowhere is basis, or it can be modified to suit the view of the pyramid, which, more often than not, is the need of the hour.  Alternatively, it can pile on the truth in a way only a file with a long history and a lot of pages can, not one that is canned within the hour!

What the Noida file has taught us is that when we open a file, the contents can surprise us, energize us, and enterprise us unlike some that will tell us to despise us.

So, this has been an enjoyable and educative tale of two files – one that makes you sit until you get piles, and another that makes you want to run a mile. Choose with guile!