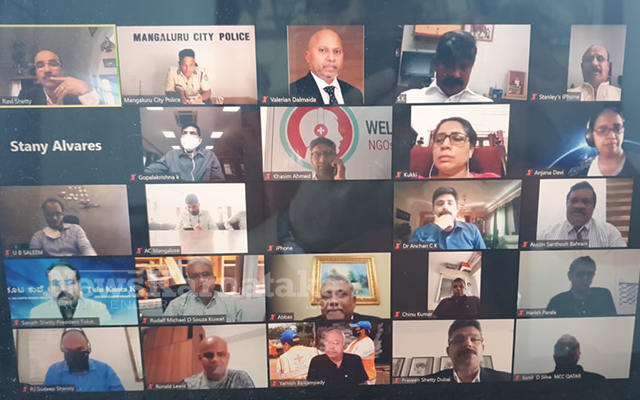 Dubai: During a webinar organised by the Mangaluru City Police for NRIs of Dakshina Kannada origin on Friday May 21, people voiced their concerns and also gave suggestions about the difficulties faced by their families back home.

The event’s keynote speaker was Police Commissioner N. Shashikumar. NRIs from the United Arab Emirates, Oman, Qatar, Israel, the United States, the United Kingdom, Australia, New Zealand, Kuwait, and Saudi Arabia attended the webinar. Participants in the discussion suggested that the media should minimise the dissemination of negative news. A few people have suggested that when dead bodies are sent from other countries, there should be assistance. The event’s attendees lauded Police Officer Gopalakrishna’s Covid care role in releasing the bodies from overseas.

“Rapid test kits should be organised in homes and entry to malls should be restricted during the relaxing time from 6 to 10 pm,” they suggested. People should be made aware of the dangers they would face if they leave their homes during the pandemic. “People or officials who speak the native language should be sent to the villages to provide medical assistance so that they can understand the concerns of the people and especially the old aged people who can only speak in native language,” said the participants.

A participant also indicated that CCTV and drone surveillance should be made mandatory in all locations. Police Commissioner N. Shashikumar said, “We are planning to introduce drone surveillance in the city to check whether people are following Covid guidelines.”

Vaccination priority should also be given to NRIs in the age group of 18-45 years who are stranded in the region. Shashikumar took note of all vaccine questions and suggestions.

All participants who took part in the Webinar appreciated the efforts taken by Mangaluru Commissioner Shashikumar and the Police Department team for launching such a good and exemplary Covid Control and Management Programme.

Commissioner of Police said that the department will try to positively respond to the concerns about the health of non-resident families residing in distant countries, who have gone there seeking employment from Dakshina Kannada district and also assured that they will do their best to provide all kinds of assistance through the various departments and voluntary agencies, added Hidayath

After assuring participants that they would do their utmost to organise and assist them as soon as possible, the commissioner of police concluded the webinar. He also provided the Dakshina Kannada Police Covid helpline number 9480802300 for any Covid-related assistance.

The webinar was organised to discuss current Covid situation, preparation done to combat the same and also to laud the various volunteer organisations’ work.