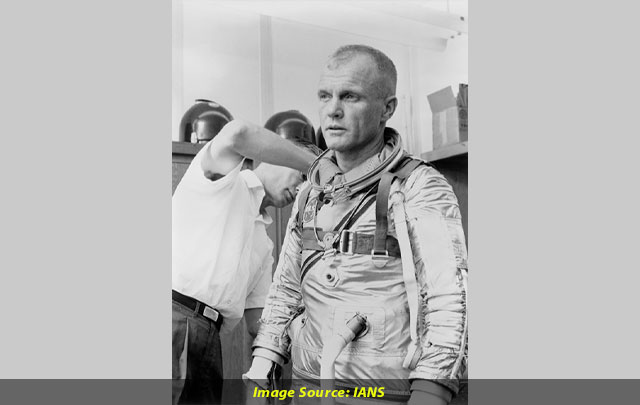 Washington: The US space agency on Saturday celebrated the 100th birthday of astronaut John Glenn who changed the history of spaceflight, becoming the first American to orbit the planet.

Other US astronauts had been to space but Glenn was the first to actually orbit the planet we call home.

“He also changed the language, adding a Yiddish term — glitch — to our lexicon. He wasn’t by training a wordsmith like Shakespeare or a musician (who often change the way in which language is used through song) but change it he did,” NASA said in a statement.

He grew up in the nearby small town of New Concord with his parents, John and Clara, and his sister, Jean.

He would later write that a boy could not have had a more idyllic early childhood.

As the US entered World War II, newly-licensed pilot Glenn committed to serving his country by air. His military career as a fighter pilot, flight instructor, test pilot, and astronaut would span more than two decades.

He retired from active service in the U.S. Marine Corps as a Colonel in 1965, according to NASA.

In 1959, Glenn was selected as one of the Mercury Seven, the first group of astronauts in the newly-formed NASA Manned Space Programme. The other six astronauts were Scott Carpenter, L. Gordon Cooper, Virgil “Gus” Grissom, Walter Schirra, Alan Shepard, and Donald “Deke” Slayton.

In 1974, after working in private industry for several years, Glenn ran a successful campaign to represent Ohio in the US Senate. He was Ohio’s first four-term senator, winning reelection in 1980, 1986, and 1992.

“As a payload specialist for NASA’s STS-95 mission, Glenn participated in investigations on spaceflight and the ageing process,” NASA said.

“A good man has left Earth for the last time. John Glenn’s life will long be remembered for his time in space, his courage, and his service to all Americans,” said Katherine Johnson, another NASA legend.