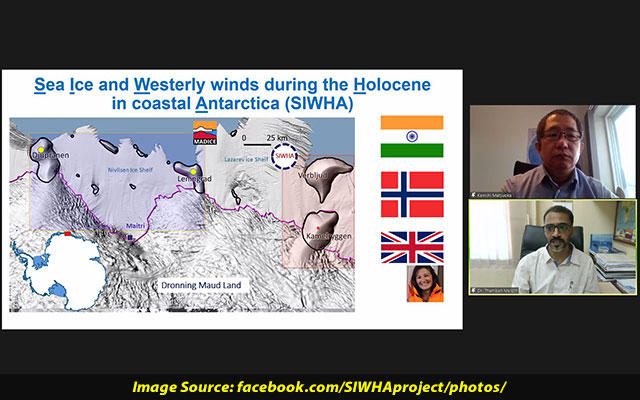 Panaji: Indian scientists from the 41st expedition to Antarctica have embarked upon a multi-year study of the movement of deep ice sheets near the coast to understand the past climate, which in turn, will help understand how it will change in decades to come.

It is for the first time that Indian scientists would drill up to 500 metres and pull put ice cores (cylindrical ice bars) that are repositories of information of the past climate events for long years duration.

“This helps us study the past climate of up to 10,000 years through ice cores that have trapped CO2 from the atmosphere from past.

Called SIWHA or ‘Sea Ice and Westerly winds during the Holocene in coastal Antarctica,’ it is a joint Indo-UK-Norway study with India’s National Centre for Polar and Ocean Research (NCPOR), British Antarctic Survey (BAS) and Norwegian Polar Institute (NPI) as collaborators.

“The 41st expedition is already at Antarctica. A team is carrying out geo-physical survey to assess correct places to drill. By next year, they will be ready with data that can tell us where exactly to drill. Drilling will start in 2022-23 season,” said NCPOR, Director, Group Director (Polar Science), Dr Thamban Meloth.

“The drilling will be done nearer to the coast with a specific reason to understand how the southern ocean which takes so much of carbon dioxide, which changed in the past. It would have a meaning for us to understand how it will change in the coming decades,” Meloth added.

Collecting the ice cores from near the coast is important and much more challenging as it is much more warmer around Antarctica. “So we need to take it from the right place actually to activate it to understand the properties below the ice.”

A specialised equipment, ground penetrating radar, helps the Indian scientists identify the ice layering and the bedrock, during the geophysical survey.

The NCPOR has been carrying out studies related to ice cores for few years now but it was limited to 100-150 metres. It is only now that digging will be done for the first time till 500 metres. The fragile ice cores are carefully stored and brought back to NCPOR maintaining minus 20 degrees temperature. To whichever depth digging is done, the cores are collected at every metre. (E.g. a dig of 150 metres will result in 150 ice cores).

For analysis of the cores, the cores are cut into half horizontally. One half is sent into archive. Ice cores are also cut into 5 cm thick slices, each of which reveals climate features from that particular time/age.