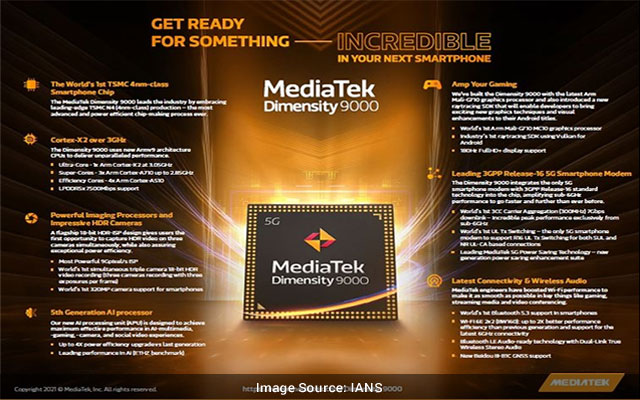 Taipei: MediaTek announced the MediaTek Dimensity 9000 chipset last week during its Tech Summit and now a new report has claimed that the chipset will carry nearly double the cost of its preceding 5G chipset.

According to Digital Chat Station, one can expect to see high-end smartphones powered by the new chipset to be more expensive than devices powered by Dimensity 1200.

The first smartphone featuring MediaTek Dimensity 9000 chipset is likely to hit the market in February 2022.

It packs a 10-core Arm Mali-G710 that takes care of graphics processing, the report said.

The chipset can handle screens with up to a 180Hz refresh rate at Full HD+ resolutions. It is also the first chipset to have an 18-bit image signal processor, offering the ability to capture 4K HDR video using up to three cameras at the same time, or still photos using up to a massive 320MP sensor.

MediaTek Dimensity 9000 supports Wi-Fi 6E as well as Bluetooth 5.3 and supports 3CC carrier aggregation for sub-6HZ 5G with top data speeds of up to 7Gbps.