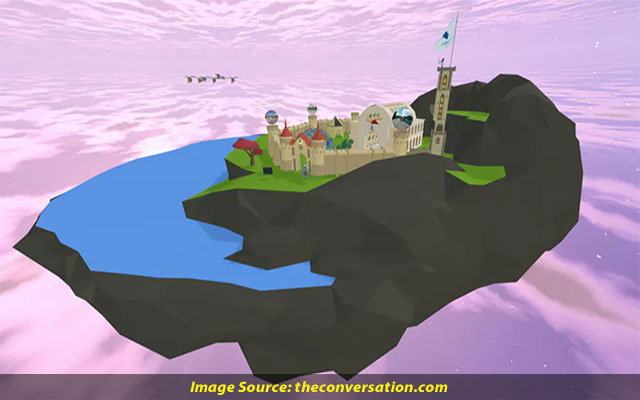 We’ve been hearing a lot recently about the metaverse – a vision for the internet which uses technology like virtual and augmented reality to integrate real and digital worlds. With Facebook changing its name to Meta to focus on this space, and other big tech companies like Microsoft coming onboard, there is much discussion about the potential of the metaverse to enhance the way we socialise, work and learn.

A key component of the metaverse ecosystem will be the creator economy. The virtual worlds within the metaverse need to be conceived, designed and built by individuals and organisations.

To that end, I established a module at the University of Nottingham in 2020 where up to 100 of my engineering students interact with each other in avatar form in a virtual world known as Nottopia. Nottopia began as a fantastical virtual island, and has since become a floating castle in the sky.

I’ve approached this as somewhat of a research project, surveying students about their experiences, and observing their behaviour within the virtual world. My observations have informed changes I’ve made to Nottopia along the way.

They’ve also informed my answers to three central questions, which I think are relevant to anyone considering their own virtual world – whether for education or any of the metaverse’s myriad other applications.

What platform should you use?

To build a virtual world that others can join, you need to use a social virtual reality (VR) platform. I used Mozilla Hubs, but there are several others. These platforms can broadly be categorised according to accessibility and customisability.

Accessibility questions include whether the platform can run on everyday computers, including mobile devices, or whether it requires dedicated hardware, like VR headsets. From my perspective, it was important the virtual world be accessible on standard technology, but also that students could benefit from the immersive experiences that VR headsets afford (students can use VR headsets provided by the university if they wish).

Customisability is how easy it is to edit virtual worlds on the platform (usually, they have a set of “template” worlds), or create your own from scratch. Last year I edited an existing world, while this year I took several pre-existing building blocks (for example, bits of a castle) to re-imagine Nottopia.

The ability to customise this world has been essential for me. I needed to develop a world where we could easily gather for whole group discussions and presentations, as well as smaller group discussions. It also needed to be a space students could contribute to (for example by adding post-it notes, photos, videos and 3D objects).

A second fundamental decision concerns whether the virtual world should be based on a real-world space (perhaps even aiming to replicate one as a digital twin) or should be purposefully different. When conceiving my VR module in spring/summer 2020, this was an interesting dilemma. As we were at the height of lockdown, I was tempted to recreate specific campus buildings so the students had the feeling of being at the university.

But based on a combination of educational theory and student feedback, I eventually created a world that was overtly fantastical. The aim was to motivate students through gamification – making their experience in the virtual world playful and challenging, somewhat like a game – and also provide an escape from the stresses of the pandemic. Hence the decision to start Nottopia as a futuristic building on a Mediterranean-style island. The reason I subsequently redesigned Nottopia as a castle on an island in the sky was to draw upon Nottingham’s reputation as a medieval city, and in response to students’ desire for a more expansive campus-style environment.

In Nottopia, I occasionally deliver lectures, but typically use the virtual space in more creative ways. For example, I often meet the students in the castle courtyard to discuss the week’s topic before asking them to follow a treasure trail around Nottopia’s buildings where they have to solve engineering problems at each stage.

How complex should the world be?

Current social VR technology presents limitations on how detailed an environment can be before it causes performance problems. This is especially the case for software like Mozilla Hubs that runs on the browser (as opposed to an application you have to download and install) and which is accessible on mobile devices.

Generally, the factors which have the most significant impact on performance include the number of polygons (the basic shapes that make up a 3D object), texture sizes (the number of pixels for 2D images placed over 3D objects), and the overall file size of the world. This was challenging to balance. The more complex your world, the more you’ll end up with low frame rates (a jittery world). A complex world can also be restricted in the number of users who can join the space.

You might assume that creating a virtual world requires considerable technical skills, including the ability to write code. But my experiences have shown me this is not the case.

The development of each of these worlds took me roughly one week. I benefited from the fact that social VR platforms like Mozilla Hubs are increasingly user-friendly, requiring little or no technical know-how. And there are many online video tutorials available.

Ultimately, the process by which these virtual worlds are created should be human-centred – designed according to the abilities, goals and expectations of the intended users. Too often, we hear about or experience products that have ultimately failed because the designers were too focused on the technological possibilities, rather than the users. The metaverse will be no different.