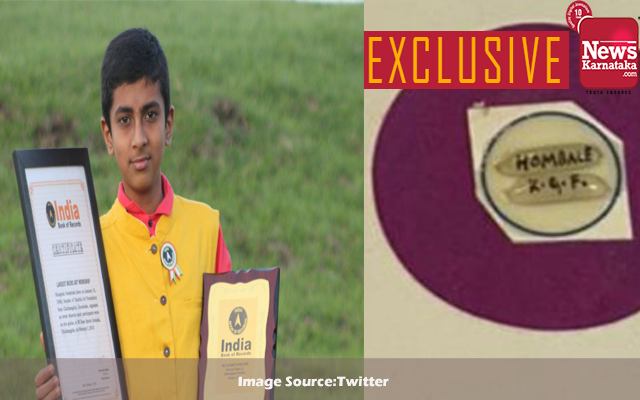 Yash starrer KGF Chapter 1 was a blockbuster and that changed the face of the Sandalwood industry. This roaring success paved the way to make more films having a global appeal. Fans are eagerly waiting for the release of Yash-starrer KGF: Chapter 2 and the release date is yet to be announced. However, even before the announcement of the release date Director Prashant Neel has assured the first-day first show ticket to the die-hard fan of Yash, Vaivasvat Tandula.

Vaivasavt is a micro-artist from Chikkamagaluru. He is currently studying in the second year of PUC. Being a fan of Yash and Hombale films, he wrote “Hombale” and “KGF” on a single rice grain, attached it with the fan letter, and posted it to the Hombale Production Company.

In response to this Director, Prashant Neel tweeted, ‘Hi Vaivasvat. Thank you for your love and encouragement. Get in touch. You have KGF: Chapter 2 movie first-day first-show tickets from our side.”

Speaking to News Karnataka Vaivasvat expressing immense happiness said, “I’m a huge fan of Yash. He is my favourite actor. I have watched most of his films. I absolutely loved his performance in KGF: Chapter One. So as a token of love from a fan I wrote “KGF” and “Hombale” on rice grain and posted it to the director of Hombale films.
I was on cloud nine after seeing his tweet as it was unexpected. I am very excited to watch the KGF: Chapter 2 on its first-day first-show,” he added.

Further, he said “My father is also a professional micro-artist, he inspired me to take up this art form. I am practicing this art since I was five years old. I have written 27 times the word “INDIA”, 135 characters in total on a single rice grain in 3 minutes 2 seconds and I’m the youngest to do so. For this, I got my name registered in the India Book of Records,” he shared.

“Micro-art is an educational art of ancient India. It was used to send secret messages. Chanakya has named it as Dhaanya Kala. Not only on rice, but this is an art of writing on all food grains. I write on a rice grain using poster color and paintbrush,” he informed.

“By learning micro-art a person can improve his memory power, observation skills, and concentration. It is my hobby and now I’m capable to inscribe 200 plus characters on one grain. I have also received many appreciations, certificates and awards from various platforms,” he added.