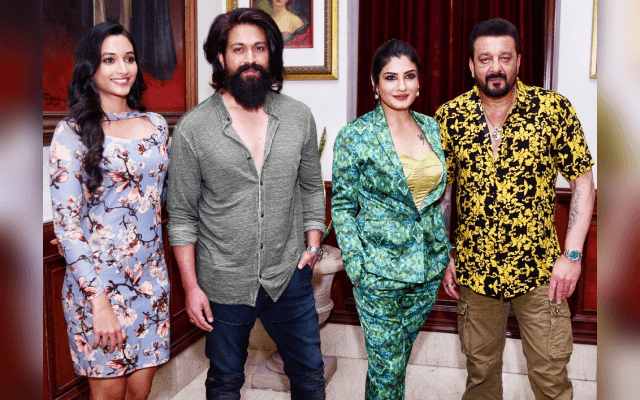 Bengaluru: As the euphoria over ‘K.G.F: Chapter 2’, the much-awaited sequel to the 2018 blockbuster ‘K.G.F’, reaches its crescendo, the star cast of the movie participated in a press conference in the Capital to talk about their roles and their experiences working in the film.

Yash, alias Rocky, along with Sanjay Dutt, Srinidhi, Raveena Tandon, and producer Ritesh Sidhwani spoke extensively about the movie and the moments they have cherished.

Sanjay Dutt, who plays the antagonist ‘Adheera’ in the movie, spoke about acting amidst his battle with cancer. He said: “I am an artist, and till the day I die, I will keep acting.”

Speaking about his role, Sanjay Dutt said: “I am lucky that I have had the opportunity to get the sort of characters I do — the criminal types.”

He added, with a slight hint of humour: “However, I do prefer romance.”

Yash, after making it past the huge number of fans that had gathered to catch a glimpse of him, rejected the alleged contrast between Bollywood and the cinema from the South. He remarked: “It is all in the industry. But the people have moved on.”

He further said, “If it had not changed, people would not have accepted it in such a big way.”

Srinidhi, who made her acting debut in ‘K.G.F’, said: “By God’s grace and everybody’s blessings, this is a jackpot for me. The movie is coming in five languages and two parts. It has become a worldwide phenomenon and is truly a blessing.”

In response to a question regarding their long association, Raveena Tandon and Sanjay Dutt had a playful banter.

Sanjay Dutt accused Raveena of talking “too much” even though he also admitted he “likes everything about her”, to which she replied, “Someone has to do the talking. There’s no use in sitting in the silent zone.”

CBFC ratings are often generate excitement and controversy. Speaking about the movie’s “UA” rating, Hindi distributor for ‘K.G.F: Chapter 2’ Ritesh Sidhwani jokingly commented: “UA means that everybody can see the movie. If it was only ‘U’, then ‘A’ would not have come.”

On his in-movie clashes and interactions, Yash talked about his love for action sequences.

“We have grown up watching action films, so there is naturally greater interest in action sequences. When both of us (Yash and Sanjay Dutt) are in one frame, you know how exciting this is going to be”, he said.

He concludes, “It’s a different high. We enjoy it. We go into that zone. I believe that I am Rocky and he is Adheera.”

Prashanth Neel directorial, ‘K.G.F: Chapter 2’, whose trailer has garnered over 100 million views on YouTube across different languages, is slated for release on April 14.