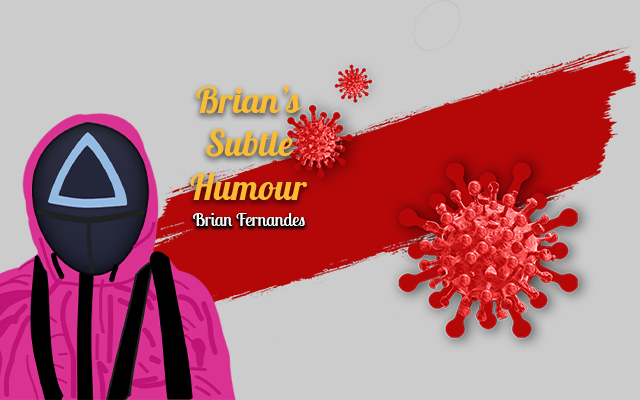 The name’s Chronic. Omichronic! That is a line from the latest Bondage movie! With a diluted license to kill, it has taken over the world…again. And we need a counter terrorist to dislodge it. Who other than social proximity? We hold hands when we are about to face death, why not when we want to live…? We hug and kiss in the hope we will live, or sometimes before we are shot? You must bend the bow to enable it shoot straight; right? Do you find this Question raised n the case of the Tennis Circuits No. 1 player! that Australian Courts found so difficult to answer, a no-brainer? Was not referring to you there… On one occasion they were positive, and on the next, negative. Much like PCR tests on which he relied for entry. Ultimately his service was ruled out in the tie break!

After losing the tie break, NoVax is Dnewjoke! Not for those in Serbia, but those in Australia. Unlike underwear, you must have it, to flaunt it. Else you will be discriminated against in a free secular, modern world that values human rights in a rather inhuman way – to protect other humans – we must remember however, that the vaccinated can get infected, if an unvaccinated man enters their midst. This logic hangs by a cobweb, given that the vaccinated are better placed as compared to the unvaccinated to receive the virus! Something like giving a bye to the top seeds in a tennis tournament to protect them from an upset.

The reality of life is that Novax is not no one anymore. You are a world citizen only if you are hairless – sorry, vacced – not once but twice, and you will be presented with a doctorate rather than a visit to a doctor. At any cost, and cost is the key word in many a nation, you must be waxed before you wane! to remain sane. If you do not consent, it is your funeral – one which you can attend and regret like no else will for you! You will become an in-law everywhere that matters – malls, parks, stadiums, hospitals too ironically, and even at marriage halls where even the bride and groom’s families demand to see the vaccination certificate before they agree to any tie up. Sometimes they lie up to tie up or they fund the drive… as a freebie!

Indeed, there was wave of weddings during the third wave! Some were incredibly inviting – so many were invited to watch the couple initiate divorce proceedings, (You cannot divorce unless you marry, right?) while at others, that the couple had only to whisper behind the mask to be heard. Pandemic couples are the best. Fully vaccinated against strife! They honeymoon at home within four walls, masked like at holloween and are vaccinated against outside interference which was rampant in the past! So, the pandemic has its blessings, not just its lesssings! They learn about each other’s tattoos and Huttu Guna very quickly, faster than did their 10th std science theories.

See also  Inception: A dream heist that will blow your mind

Weddings are extraordinary events in everybody’s life, I guess. Even those who have been living and hopefully loving together for some time if not a long time. Either the parents or the couple spend a whale – even if they cannot really catch one – on it. They invite the neighborhood, extended family and school and college friends long out of touch. They wear the grandest of clothes, choose the best of locations, provide a variety of food and beverages, and create elaborate ceremonies, all to ensure that the couple is primed for a long partnership.

Primed all right, but if you see Amazon Prime, most marriages do not last long – these are called original series. Not because you watch it – most couples watch it together, except those that have already grown apart – but you can draw an inference from what one can find on it!

And so, I was surprised and impressed when I was invited to a golden wedding anniversary celebration, where the 80-year-old gentleman who never sang at all was moved enough to sing for his 75-year-old bride, “She wears my ring”! And indeed, she was still wearing it.

They hardly spoke, except with their eyes, and the messages were clear. Killer looks had not killed the joy, even after 50 years. They smiled a lot, and even did things that surprised the other. Who was the better half and who was the other half would be the devil’s choice question…? In contrast, at a wedding, the couple had to speak to each other to understand one another, laugh loudly to be sure they enjoyed each other’s company, and party hard to ensure that what was to come was not a priority at that moment. The moment had to be cherished.

So do Indian couples, that tie the knot, untie it quickly? Not really. India is considered to have one of the lowest divorce rates in the world. Indeed, if we rely on cold figures and statistical studies, it turns out that in India, only about 1% of all married couples end their joint family life with a dissolution of marriage. This indicator is immeasurably insignificant compared to the average statistics for the United States in recent years, where more than 45% of official marriages end in divorce.

Dhanush, Wife Aishwaryaa Separate After “18 Years Of Togetherness” was the headline on NDTV.com today. Dhanush and Aishwaryaa got married on 18 November 2004. The couple has two sons – Yatra and Linga – who were born in 2006 and 2010. This was followed by a reference to a Megastar’s daughter untying a tidy knot. Telugu360 was the first to report that all is not well between Megastar Chiranjeevi’s younger daughter Sreeja and her actor husband Kalyaan Dhev. The duo was not in good terms for the past few months, and they decided to part ways. Sreeja and Kalyaan Dhev are blessed with a baby girl Navishka, and she turned three recently.

Good terms? Which one Marriage or Divorce? The Indian philosophy is clear. This start up is forever. It must become a unicorn… but then why is India 148 on the happiness index?

Well, the answer to that is: Virat Kohli, India’s most successful, most enthusiastic, most expressive, and most impressive Cricket Captain announced his resignation from his role as the Captain of the Indian Test team.  This before the BCCI could do it. He could have done it on the stump mic but chose instead Instagram. It was a divorce that falls in the one percent mentioned above.

Two sporting icons in a week making the headlines for all the wrong reasons, but for reasons they believed were right, were for me the highlight of the week that was…. The rest were hogged by Politicians and their parties – boozy parties at 10, Downing Street and by political parties across India’s largest and smallest state.

It had to be state of the art, given that the Election Commission – nice name for an independent body – had banned physical rallies which most were adept at. But they are great at converting Obstacles into tentacles that draw people towards themselves like an Octopus. Incidentally Octopussy was the name of another Bondage movie – the entire series is incidentally now available on Amazon Prime.

Watch it together. Stay bonded until next week!

4 thoughts on “This week’s learning: Vacs before you wane! - 6 min read”