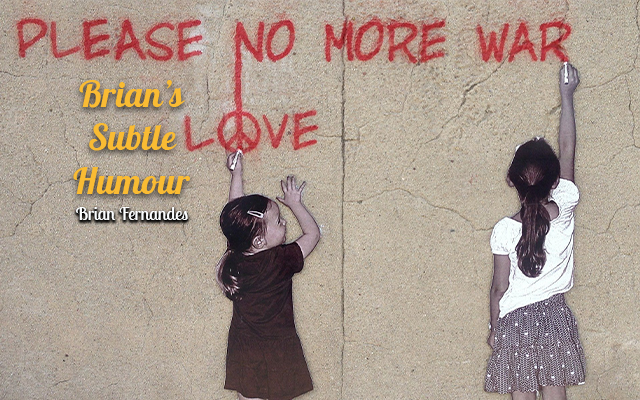 Maybe not, but if you humour me, it may reduce the tension caused by the war while those at war lose their pension. I’ve just Putin a word, is all; I don’t want you to feel insecure.

War is described as a struggle between opposing forces for dominance and pre-eminence. Check out your WhatsApp group for examples. Every force in this universe requires an opposing force to react to and there lies the essence of our existence. Even among a homogeneous population, do you not find fractions, factions, and friction? You will, if you are fastidious enough.

We are always at war – with someone, some idea, some thing, some country, some planet and all of us together with the environment because it stops us from expressing ourselves as they say in cricket commentary… It’s like Hotel California, you can check out any time you like, but you can never leave!

And those who are at war – and that’s all of us – want to win it all the time. For the winner takes it all; he is revered and reserves the right to strike at will even without a will that bestows upon him that right! War keeps the economy of the world moving, its peoples motivated, and tells tales of heroism and sacrifice that would not have come to light, if not for war.  Does it not? It also tells tales of death and destruction that are quickly forgotten? at least by the victor. War has a side effect too. it causes selective amnesia and PSTD, depending upon which side of the war you are – the winning or the losing side!

Then there are those who will bet on it too! And there are the odds makers, who are never at odds with what they are doing!

War provides meaning, purpose, and an attitude of take and give – not give and take! War does it all, and yet we are at war with idea of war itself! It’s not clear why. Ah! that’s because it’s the essence of the universe. See previous paragraphs! Being at war with war itself is a sad conflict to be in if you are not Putin to it! And right now, you are, even if you Zelensky want to stay out of it! So, what do you do? You fight! to win! or lose! and then start all over again!

See also  Mother's Day has come and gone and mum’s still the word!

It’s like WWE – War Without End. What did you think? it was a wrestling match? Yea, maybe it is. Kind of. You’ve got to hit the ropes before you bounce back! And bounce back you will, not immediately, but over time, certainly. Somebody will pick you up, nurse you back to health and wealth and then put a stick in your hand, that you hope will stick, this time around. And so, it goes.

Even a tennis match or any sport is a type of war – is it not? There is a winner, and there is a loser. Somebody wins and somebody loses, only to try to win again in the future! And the guy who wins struggles to maintain that winning streak. It’s a never ending struggle. Its possibly the essence of our life. It’s exactly why we are here on earth. to fight for our rights, to fight for what’s right (according to us), and to fight to take what we want – not need; and at the end of it all, fight to keep it all! Isn’t even an election a  war that follows the same principles? It too has casualties – mainly you and me!

But war, any war is not easy, let me tell you. You have to mobilize, sustain, justify, and evangelise for your cause! and keep doing it in one endless loop. One slip of your stylish flipflops and you will find yourself heading down a slippery path, with no hand railings to steady yourself.

In Management and leadership classes they teach you about conflict resolution. I’m not sure I understand why, because elsewhere in the syllabus of such courses, they tell you that conflict is the source of all reform and provide you with the example of a diamond, the one you or your spouse wears with pride, and loses in war or in a robbery – a kind of war itself. Simply put, diamond formation occurs when carbon deposits deep within the earth (approximately 90 to 125 miles below the surface) are subject to high temperature and pressure. Some stones take shape in a matter of days or months, while others take millions of years to materialize. So what is the truth – is war good or bad?

When you are war, others will try and talk you out of it. But you will not hear of it (your hearing will be obtuse) – while you are winning. When you are losing, your hearing becomes acute. And through these two extremes, everyone will be trying to connect the two through a hypotenuse! Rarely succeeding, and then their successors will do the same!

Ukrain’t escape a war, once you are Putin to it. That’s the truth about the Ukraine-Russia conflict. They both find themselves between the black and the Dead seas!. The conflict stems from insecurity about security, though it might also be because of a hangover, from Vodka of the Soviet era. What is interesting about this conflict is that one player was a former Soviet Era, Intelligence (and intelligent) agent with little or no humour, the other, is a political satirist filled with a sense of humour. He shot to fame with his  “Servant of the People,” a satirical TV show about a down-on-his-luck high-school teacher, played by Zelensky, who is thrust into the Ukrainian presidency after his rant about corruption goes viral. You can look for a parallel if you have the time.

The series made Zelensky a star and eventually served as the springboard for his real-life presidential campaign. In April 2019, within a month of the show’s finale, the comedian-turned politician was elected Ukraine’s president and now finds himself truly a Servant of the People, not just as a figure of speech, but a figure who, maybe will have to serve them with all he has including his life and keep his sense of humour. That’s the price of war, any war. Speaking of prices, you get the best prices for the tools of War at Warmart!

By next Tuesday, when I have to go to war with my mind again, the current war would have reached a decisive stage. The rouble has already become a bauble, the Banks are having the runs without a laxative! Money vs Missiles – Who will win that war? Someone has to, no? Please humour me – promise me you will think about all of this seriously, with a sense of humour!

One thought on “Wars are full of bone collectors, but a funny bone is hard to find! - 6 min read”