I have just read a remarkably interesting story on CNN. According to the story, a man is on the run after allegedly killing two neighbors. “Some in China hope he will never be caught,” says the headline.

The headline attracts – because it is rare that an alleged killer receives public support. It is only state and non-state actors, wherever they may be – and no entity can claim utter innocence in this regard – that are said to support such killings. One uses paperwork, the other tapered work to achieve their ends.

Was it an act of terror or error (that’s terror without the T followed by a cup of coffee in a cafe) or something else? Apparently, it is something else – an error – deliberate or otherwise – that caused the terror. He caused terror after being terrified. This must be inferred from the story and the social media support for the terrifying acts that both preceded and followed.

The story starts like this “Ou Jinzhong has been on the run for more than a week. Accused of killing two neighbors and injuring three others, the 55-year-old villager in China’s southern Fujian province is wanted by police. The local government has also offered cash rewards for clues to his whereabouts — or proof of his death. The manhunt has gripped millions of Chinese people — but not because they want to see him arrested. On the contrary, many are openly hoping he is never caught”. This, the story has gleaned from the chatter on Weibo – China’s Twitter wannabe. The reason? Apparently, he had a dispute with a neighbor over land.

This is the story in a nutshell: Ou Jinzhong had a house in which he lived with his aged mother. Since the house was dilapidated, he applied to rebuild it and was given all the necessary clearances after which he pulled down the old house. He was about to start construction of a new one when the neighbors raised a dispute. He built a tin sheet shack in which he lived for over two years while he tried to get the dispute resolved through talks with the neighbor, rounds of all government offices and politicians – all to no avail.

Then one day during a storm, a part of the sheet flew off and landed in the neighbor’s compound after which an altercation ensued. In the altercation – the facts are still unclear – 2 died and three are injured. The alleged killer – many are calling him the victim of the system – has been on the run for 10 days now, apparently with a tailwind of public sympathy, at least on social media. For the rest they are silent. It is called the silence of the lambs and we know what happened to them! Social Media sympathy may not help him much though, given that the humans of this world are primarily hunter-gatherers and are exceptionally good at it with all kinds of animals – Lots of practice over centuries; they have even refined their tools for their own kind!

This is a tale of one city and two facts – Everybody wants to live and is desperate to do so well by his or her own standards which he raises every day – If you have seen a person drown, or you have almost drowned – it will be evident. But do not try either just to find out – take my word for it.

Second, – and this flows from the first – is that one’s own life is more precious than another’s is because it has a greater purpose! Have you seen run-outs in a game of cricket? Listen to the commentary and you will understand.

The reason is primarily that we fear the unknown – we know what comes before, but what comes after? Will it be better than this, our life on earth?

We ask this question of ourselves every day – And if the answer is a resounding no, great; we go on living and making the best we can out of the deal we have been dealt with; if the answer is yes, we do something about it; often something drastic.

And then there is the maybe, maybe not. Why try to find out what is next? A known devil is better than an unknown devil and the devil always gets his due! Let us meet our expectations here on earth itself. Though we have an inkling that we may never, because they keep changing every minute of every day, the journey is exciting and challenging, provided the walls give way after they are hammered a bit. If they remain firm because of the cement used (Remember that ad for cement not so long ago?) – the cement of our limitations – money, health, ability, and the x-factor – the system, the fear sets in fear is always accompanied by anticipatory anxiety for which there is no provision for anticipatory bail! Remember the reality show? or the story of the ant and the elephant? This is that story.

Alistair Maclean’s 1961 novel and 1972 movie – “Fear is the key” explains this very well. The endgame of the novel provides answers to all the questions raised here; “Talbot then switches off the oxygen and tells Vyland and Royale they will die in six minutes” and that resolves all the conflicts in the novel. Let me not function as a plot spoiler in what is a beautifully written potboiler!

When fear has your ear, there is always a tear. Given that fear is a passkey, it is used by many to open many locks – locks that prevent them from reaching their potential, locks that seem intractable forever. Sadly, the locks change, but this one key can still open them. F

The way to prevent the lock from being unlocked by the unauthorized use of a passkey is to bend the key or remove the sharp edges of the key so as not to hurt the lock’s cylinder! Not with Rust but Trust.

I or We? When fear is the key, trust is a must! 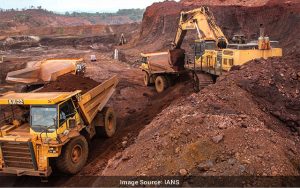