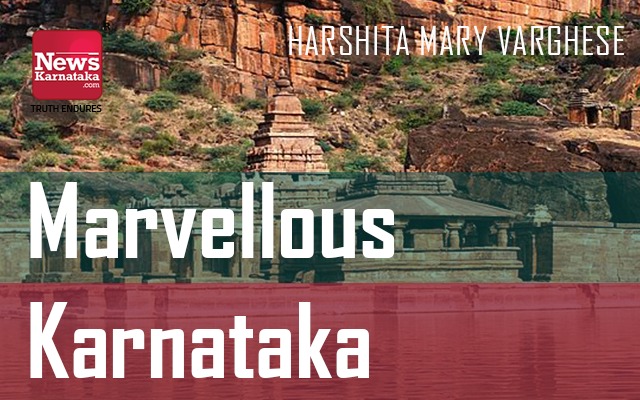 The town of Badami which lies in the Bagalkot district of Karnataka is known as the storehouse of temples. Located across the Agastya Lake, the place gives a unique experience and is home to many red sand stone formations, caves, temples and other spectacular structures.

Badami occupies an important place in the heritage history of Karnataka and was known as the capital of the Chalukya Empire. Situated between two lofty hills, the caves which are cut out of rocks are a very beautiful piece of history which speaks of the empire and its rule. The exquisitely carved pillars and sculptures made out of the red stones remains as ghosts of the past. There are four Hindu caves that are located in the area which is a fine example of the architectural excellence of Chalukya Empire. Apart from these structures, the surroundings are also a sight to see. These caves are a sight to behold during the sunset time when the red stones glisten with the light reflecting off from it. They are dated back to the 7th and the 11th century and is dedicated to Lord Shiva. The grandeur of empire can also be seen in the Malegitti Shivalaya Fort and Temple which is dedicated to Surya, the Sun God. The fort is famous for the way in which it is constructed in the Dravidian style. At the top of the fort there is a small picture of the Surya, featured with seven horses, which makes it one of the fascinating tourist places in Badami.

Another ancient structure that is still in existence in Badami is the Ravana Pahad which was built in the 6th century and is dedicated to Lord Shiva. One can find a broken column situated right next to the cave entrance, which opens to the southwest.

When speaking about Badami, one cannot forget about Agastya Lake which is said to be holy and has healing powers. Surrounded by the panoramic view of the hills, this lake takes its characteristics from mythology and is believed to destroy all sins. The local inhabitants preserve the waters to make sure that it will not go dry for the future use. Nestled at the top of cliff in Badami lies the renowned archeological site, the Badami Fort. It is situated exactly opposite the Badami caves. It gives a magnificent view of the Badami town below.

On the way to Badami, visitors often stop by the village of Aihole which is considered to be a religious place and consists of ancient and medieval era of Buddhist, Hindu and Jain monasteries. Popular sculptures on the walls and intricate designs of the structures attract a lot of attention. Badami is in close vicinity to one of the most famous temples in Karnataka, the Banashankari Amma Temple. The Temple has millions of devotees flocking to the place, offer their prayers, food items and so on to the Goddess.