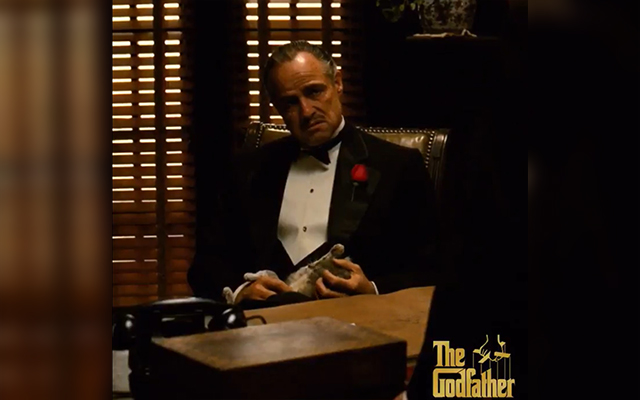 The 1972 American Crime film The Godfather is one of the best Francis Ford Coppola and Al Pacino combo to ever grace the silver screens. This mega blockbuster by director Coppola is based on Mario Puzo’s 1969 bestselling novel series with the same title.

Everything about old Hollywood and organised crimes can be seen incorporated in this masterpiece which continues to hold a very special place in the history of films. While studying the various genres and classics in Hollywood, the name – The Godfather, cannot be missed. Coppola has created the film in such a way that it transcends the simple genre and has become a beautifully crafted gangster movie.

The film won many Academy Awards in the year 1973 in categories like Best Picture, Best Screenplay and Best Actor in a Leading Role.

The film’s beauty, in my opinion, comes in the plot, which has been constructed in such a way that the characters are locked in their own world. Even though the entire act is Mafia and strictly illegal, there is a certain style to the story which invokes a kind of sympathy towards the characters and if looked upon from a world view, are essentially evil. There isn’t a single character in the movie who looks to have a conscience to speak out against the injustice that occurs as if it’s the most natural thing in the world. Despite this, one may find the deeds done by the characters to be quite admirable.

Although the movie starts off with the story of notorious Don Vito Corleone played by Marlon Brando, the rest of the scene is carried on by Michael (played by Al Pacino), the idealistic war hero turned ruthless crime lord. This is the terrible irony of the film’s title, which originally referred to the father. Power and justice go hand in hand in this film, but the criminals in this created world are just traitors who oppose the ultimate patriarchy, the Godfather.

The film is highly notable for one of the most iconic and best performance played by Marlon Brando. Corleone’s most distinguishing feature was his Bulldog-like mouth, which was created by the actor himself.

Another thing to notice in the film is that there is little to no roots setup for women characters to thrive. Some of them are even left unnamed throughout the entire film and so are ignored.

An added feature of the film is its cinematography where darkness and its richness are used to represent the intensity and the style of a scene. The film is best known for the ‘Godfather effect’ in which absence of fill light are noticed in the indoor shots. This could be seen as Don Corleone’s eyes are hidden behind the shadows and only half of his face is seen in most of the indoor scenes indicating the evil character he is.

The film’s repeated usage of red, black, white, yellow, and orange visually embodied the battle between good and evil.

The frontline actors are populated with darkness and yellow tone when they are in the interior of the walls. The most remarkable play of light can be seen used to represent Michael who is seen to have been slowly transitioning into darkness and finally reaching its final stage when he transforms himself into the Godfather.

Once you’ve accepted the gangster team, you won’t be able to stop listening to the film’s theme music, which will make you want to watch it again and again.

For movie lovers all over the world, the film is still as fresh and exciting as it was when it first got released. The name The Godfather is like a statement rather than just a movie played for 2 hrs and 58 minutes.