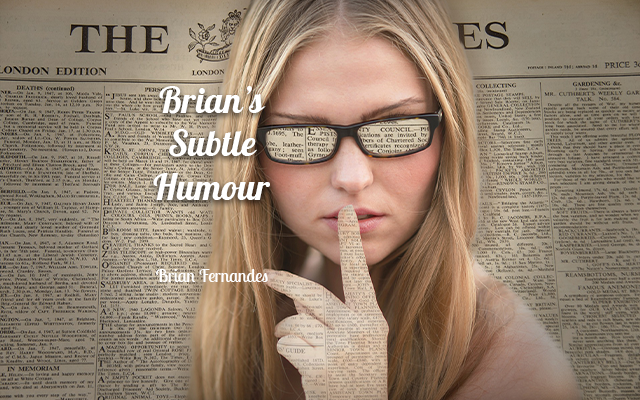 An Informed Public – is that a misnomer? Must be. Like Freedom of Expression (FOE) is an oxymoron. The two are well connected – An Informed public and Freedom of Expression. It is much like a marriage for all seasons, not just for a reason. They are often at loggerheads but really cannot live without each other. Sadly, they end up in geriatric care together too! There is a new transgender in the making too – a mis-informed public!

For long, a long and happy married life was touted by light veiners as the mother of all oxymorons, but that has been replaced by freedom of expression in democracies around the world. FOE is often sacrificed at the altar of FOMO – Fear of losing out! On the benefits of being a minimalist when it comes to asking the right questions!

And that is why we must celebrate when the Nobel is given for noble work, and it is noble work, much like work done under MNREGA! – Creating public assets at a minimum wage! I quote from the press release of Nobelprize.org. “The Norwegian Nobel Committee has decided to award the Nobel Peace Prize for 2021 to Maria Ressa and Dmitry Muratov for their efforts to safeguard freedom of expression, which is a precondition for democracy and lasting peace”. Indeed, their noble work will cause more disquiet than peace, but is expected to create an ambiance for lasting peace!

What intrigues the mind are the words – precondition for democracy and lasting peace. Nothing in this world operates on pre-conditions – the universe itself operates in the moment and a pre-condition only cramps its style; it, therefore, often, ignores it! It is not the fault of the universe per se, just the people in the universe – who are more unitary than universal in their thinking – no matter what their website and Facebook profile may say about them!

We all are, given the divisions we see on WhatsApp groups these days. It is tough to go beyond the blue tick without being ticked off, one way or another. This is also perhaps, because, despite the efforts of such Nobel souls, it is not they who guide our opinions; in fact, not even our circumstances do; it is our peers and “friends” on social media who do, through an algorithm which operates as though it’s wired into our brain much like what a pacemaker does for the heart. We do not read, and so in the end we must bleed, or make others to!

According to the press release – we must be thankful they could release it – Ms. Ressa and Mr. Muratov received the Peace Prize for their courageous fight for freedom of expression in the Philippines and Russia. Both are purportedly – according to their systems of the election of their governing representatives – democracies. And yet they live without lasting peace. I do not draw parallels because drawing was not my strongest subject at school. You may be able to do that better.

The Press Release goes on to say, “at the same time, they are representatives of all journalists who stand up for this ideal in a world in which democracy and freedom of the press face increasingly adverse conditions” – So true – just look around you.

Do not worry, you will be fine, if you look around and shut up! It is something we are all learning to do. Luckily for the world, some are slow learners, and it is from them we get our nicknames – informed public! Who said slow learning is a disability? It can win you a Nobel, provided you do noble work.

What this Nobel Prize tells us is that Reporters are never without borders or for that matter, orders from above. And yet some rise above!

What if the 2021 World Press Freedom Index produced by Reporters Without Borders (RSF), a French NGO, has again placed India at 142nd rank out of 180 countries. … In 2016, India’s rank was 133 which has steadily climbed down (another oxymoron) to 142 in 2020. I say so what, because it is a French index, even if they say that they operate without borders. They do not really understand our ethos, our pathos, or our chaos. If you are taught not to question your elders, it is improper to question those who govern; right? And if you do, face the consequences – like you did when you were much younger and questioned your elders!

But there are so many who, content and feeling protected under the umbrella of freedom of repression, say that YOU just CANNOT be allowed to say what YOU want when YOU want,  because it might hurt some other’s sentiments, governments included. They get sentimental when you express yourself. But they do not cry; they get angry and that does not bode well for you. So do what is reasonable…. To them. And that’s good advice… free!

This is our reality. Our reality is not limited to Big Boss or Dance pe Dance. At least not our reality, which happens to us every moment of every day. Our lives are waves, not of covid infection, but cause and effect that alters our behavior; at least that is what this year’s Economics Nobel Prize winners have found out through diligent research!

The Royal Swedish Academy of Sciences awarded the Sveriges Riksbank Prize in Economic Sciences in Memory of Alfred Nobel 2021 with one half to David Card, University of California, Berkeley, USA “for his empirical contributions to labour economics”, and the other half jointly to, Joshua D. Angrist, Massachusetts Institute of Technology, Cambridge, USA, and Guido W. Imbens, Stanford University, USA for “for their methodological contributions to the analysis of causal relationships.”

What those Tharooristic sentences are really trying to tell us that many of the big questions in the social sciences deal with cause and effect. “How does immigration affect pay and employment levels? How does a longer education affect someone’s future income? These questions are difficult to answer because we have nothing to use as a comparison – except our own! We do not know what would have happened if there had been less immigration or if that person had not continued studying”.

This year’s Laureates have shown that it is possible to answer these and comparable questions using natural experiments. The key is to use situations in which chance events or policy changes result in groups of people being treated differently, in a way that resembles clinical trials in medicine. And believe me, everyone feels they are being treated differently according to their circumstances!

Hilariously, – and scientifically – you can do these “natural experiments” yourself. Did the lack of oxygen cause death? Did demonetization curb your source of black money? Have the rising fuel prices, created better roads? Has a double dose of vaccination given you immunity from Covid? So many “natural experiments” you can draw upon to come to your own economic and even social conclusions. You can be a self-styled Niti Ayog yourself! This is if you are unemployed!

Indeed, if we examine our own lives, we will find we have plenty of natural experiments to draw upon for inferences to guide future action. This freedom we all have! And we must make use of it. Who knows, one of us might produce some prize-winning conclusions which will ease our finances substantially! And of course, we could issue a press release and actually release it to the Press. Unless we are pressed to do otherwise!

Good luck with all of that until next week!