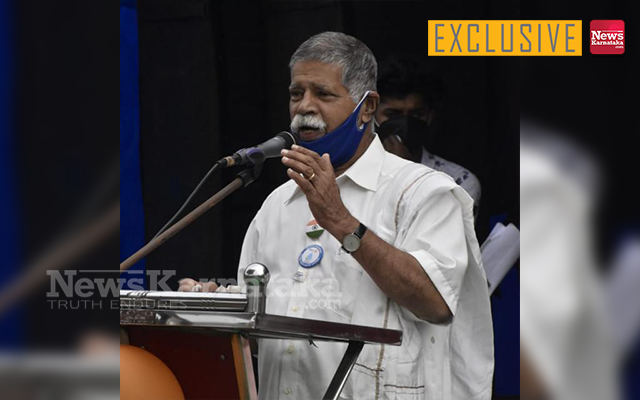 Robert Franklin Rego of Bajpe, who is in his early 70s, continues to contribute to society through his humanitarian service. He is an agriculturalist as well as a social worker and has engaged himself in Swachh Bharat campaign, greenery, and other initiatives. Even at this age, he is an all-rounder full of energy and enjoys participating in sports events.

In Bajpe, he has put an 8×6-foot-long flex of a rare photograph of Atal Bihari Vajpayee, George Fernandes, and Abdul Kalam that appeared in Rotary News in 2018. He was deeply impressed by these three prominent people’s contributions to the nation and thus wishes to establish a statue of them at Bajpe.

Speaking to News Karnataka, Robert said that, “This photo was taken during the second Pokhran explosion in 1998. That time Vajpayee was Prime Minister, George Fernandes was Defence Minister, and Kalam was a technical advisor. These three are exemplary personalities in the history.”

The article about them left Robert speechless and he says that he is aware of their lives through reading. When asked about why such a thought to erect a statue, he explained that, “I wanted to put up a statue of all the three of them together, but the cost would be around 4 to 5 lakhs, and I couldn’t afford it. People talk about renowned personalities’ lives but when it comes to money, however, no one is willing to donate to a good cause. So, I paid for flex with a photo of three of them and installed it in Bajpe. The primary goal of this installation is to send a message to future generation,” he added.

He went on to say that there is no meaning to a country or a place without history. “If we are not leaving something for our future generation, then where lies the value? We need to give values to the people. If not, they may not know who Vajpayee, Kalam, or George Fernandes is,” said Robert.

According to him, today religion has also become a controversial issue, yet these three represent togetherness in the absence of religion. “George Fernandes has magnificent contribution against his name through formation of Konkan railways. Journey from Mangaluru to Mumbai used to take 48 hours, but now it only takes 16 to 18 hours, which is incredible. Likewise, Kalam and Vajpayee have set such a great example for the people of India,” he stressed.

He claimed that besides the international airport, which was established in 1952 there hasn’t been any other development in Bajpe. “People say that politics is bad but it is important. Today, we don’t have a good road and also are facing garbage and water problem. I once wrote to the local MLA about a road that connects Mura and the airport which is filled with potholes. Unfortunately, there was no response. So, what we want is result-oriented politics and honesty. But society has become so corrupt these days.”

Robert is also the face of AAP in Bajpe and plans to contest the upcoming elections. He is extremely happy that the coastguard’s academy that is to start in his village. He believes that it is always good to give something back to the place of your origin.