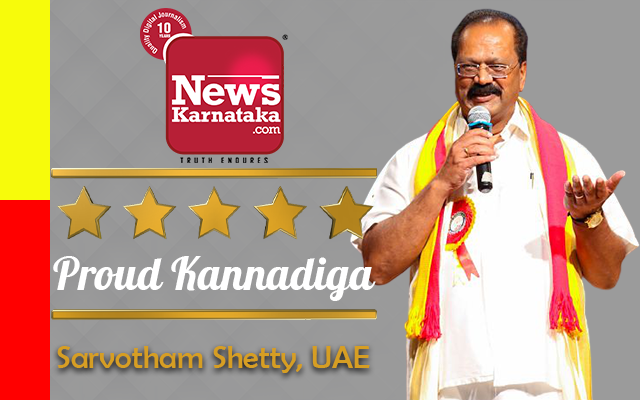 Traditions, culture and language – these facets of our life are deeply-rooted within the way we live and hence has become an integral part of our existence. No matter where life takes you, one should always stand proud and never forget these aspects which make us who we are.

Among stories of people chasing new dreams and a new life in a foreign land, one gets to hear tales about people creating communities and bringing together folks in the name of language. Sarvotham Shetty’s account of the past 42 years in the United Arab Emirates is one such passionate tale.

One word to describe Sarvotham Shetty would be that he is a ‘leader’. He was instrumental in the formation of Karnataka Association, Bunts’ Association and Tulu Koota in the Arabian Gulf. “It’s in my blood,” said Sarvotham Shetty when asked the importance of mother tongue. “From young children to adults, everyone should always remember their mother tongue which is an important part of your identity,” he said.

Creating a Platform for bonding of Kannadigas in UAE

Sarvotham Shetty has devoted his time and energy to organise several art and cultural activities for the Kannadigas in UAE. His love for his culture radiates to the people around him. Till last year, he had been organising the Karnataka Rajyotsava on the first Friday after November 1. This programme was filled with several competitions like folk dance, songs and drama performances, all of which has to be in Kannada language. Once a year, picnics are also organised by him wherein he promotes dance, art and culture through various projects, all of which is conducted in their mother tongue. People of all ages come together and enjoy quality time during such events. “These programmes create a platform and bring fellow community closer to their language and helps them to never forget their roots,” Sarvotham Shetty said. He opened culture platforms like Karnataka Sangha Abu Dhabi, UAE Bunts’ Sangha, U.A.E.Tulukoota, Namma Tuluveru so that people can greet each other and share their traditional bond. His good communication skills and authoritarian look has helped him gain the respect of the people around him.

Born and brought up in Pareekha in the district of Udupi, Sarvotham Shetty always believed in ‘earning while learning.’ He moved to Mumbai after his Pre-University education worked various jobs in a hotel to earn his livelihood. “From cleaning tables to managing the place, I have done it all,” recalls Shetty. After completing a Government Commercial Diploma from Bombay University, he later continued his education in R.A. Podar College of Commerce & Economics, Mumbai and received B.Com degree. While completing the course, he appeared for the bank exam and got into Syndicate Bank in Mumbai. “It was my dream to finish graduation and while working, I went to college to finish my dream,” he said. “I went to classes from 5.30 am to 9. 30 am and from 10.30 am I would go for work at the bank.”

During his life as a college student, Shetty had made a name for himself by being an active participang in various activities offered. He was the Student’s Union representative for the morning division and later went on to represent R.A. Podar College as a Student Representative to the Senate of the University of Bombay in 1977.

Shetty who was vehement over drama, art and culture, founded the drama association Kalajagathu in the year 1979, after passing out from college. “Through this association we showcased Tulu and Kannada dramas and I have also acted in a few,” he said. Dramas of writer and director Vijayakumar Shetty were displayed, he added. This association till date is working towards promoting Kannada and Tulu theatrical plays in Mumbai.

When life became hard for Shetty in Mumbai, he went to UAE in the year 1979, seeking a better life. A leading business house of UAE; International Distribution Establishment of Abu Dhabi invited him to join them for a key position. He has served as a General Manager for 25 years in International Distribution Establishment and presently is managing his own business in the UAE capital Abu Dhabi.

Seeing his sincerity and zeal towards the cause of promoting brotherhood among his community, he was awarded many positions of honour through the years. He was the first Kannadiga to be elected as the President of India Social Centre (ISC) for the year 1999 – 2000 and he created history again when he was once again elected as the President of ISC in 2002 – 03. “I was the first and the last person to be unanimously elected by the association,” he stated. He is the member of Board of Governors of the prestigious Abu Dhabi Indian School, Abu Dhabi which has over 12,000 students and is also the Chairman of Sports Division of the school, since 1997. Shetty was also the founder Vice-President of Toastmaster International Abu Dhabi Chapter and he became a CTM.

Shetty is also interested in sports and hence he played a major role in introducing the game of ladies and gents’ throw ball in Gulf through the Bunts and Kannada Associations. Many competitions like the Koosamma Shambu Shetty Memorial Throw ball Tournament for Ladies, Gents and Children (below 18 years), were organised by him, by inviting teams from even Mumbai, Pune and Bengaluru.

Sarvotham Shetty’s relentless dedications to Kannadanadu has been recognised and appreciated by many. In 1998, the Government of Karnataka conferred on him ‘Karnataka Rajyotsava Award’ under the category of ‘Horananda Kannadiga’ for his contribution in the development of Kannada Arts and Culture in foreign land.

One thought on “Wherever you go, never forget your mother tongue: Sarvotham Shetty”