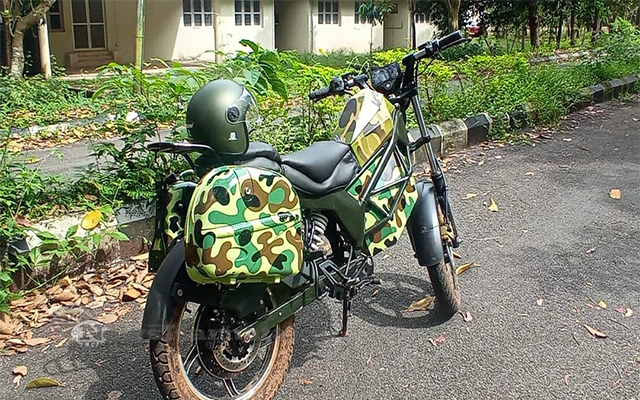 Mangaluru: The National Institute of Technology – Karnataka (NIT – K) in Surathkal in the City have developed a solar chargable e-bike. This electric bike has been exclusively designed for the use of forest officials of Kudremukh National Park.

This is the dream project of Centre for System Design Associate Professor Dr. Pruthviraj U. This e-bike has been handed over to the forest officials at the Kudremukh and is being used on a trial basis. This bike named Vidhyug 4.0  weighs around 80 kg. This bike has no stroke engine as it has brush less DC hub motor. The bike is very handy for the officials as it has inbuilt mobile, GPS, and walkie-talkie chargers. Also, the bike is soundless which means no wildlives will be disturbed. Even in the times of poaching and activities of thefts, they could be caught off-guard as it produces no noise.

The bike can carry two persons even in steep mud roads, and has a mileage of 80 kms per three hour solar charge. Its head light can also be used as a torch.

Speaking to NewsKarnataka, Dr. Pruthviraj said that the team designed five e-bikes in total since last two years. He said during Covid lockdown our enthusiastic  students did not waste time and involved themselves in developing e-bikes. He said that this bike was developed with the financial assistance by Kudremukh Wildlife Wing Forest Department. The team consists of Rakshit, Razak, Steven, Latheesh (MTech students), Anuradha and Sandesh (PhD students).