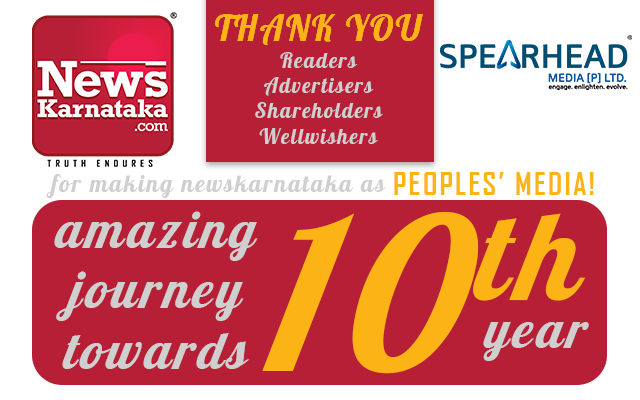 Spearhead Media popularly known as ‘Peoples’ Corporate!’ that started its ambitious journey into the Media world in November 2013 from Mangaluru, a coastal city of Karnataka, is today, celebrating with you, the dawn of the decennial year of its flagship media subsidiary – newskarnataka.com. This much-loved Karnataka-focused news web portal began its operations as a Kannada news portal on this very day in 2012.

That newskarnataka.com preceded the corporate setup may be a dichotomy. But like everything in this world, the natural evolutionary process that governed its establishment and has brought us to where we are today – a media house focused on and for entire Karnataka and Kannadigas around the globe, that was intended to become, and indeed has become the voice of the people, by the people and for the people of Karnataka. It was the vision of six idealistic youth that delivered this gem, and they continue to be associated with it and its development. Its editorial independence is unparalleled in the industry, and its integrity never in question. Its response to all its stakeholders has been one of immediacy with integrity and impartiality. It is a corporate entity no doubt, but a peoples’ corporate – for the people, of the people and by the people (all stakeholders including its 45 shareholders, over 100 contributors, its numerous advertising partners, its individual benefactors and of course its internal team of young and dynamic as well as veteran journalists that renews itself periodically!)

The evolutionary process – a few of us internally call it the revolutionary process – has taken us on a journey that has been creative, exciting, exacting, challenging, rewarding and at some points, disappointing. But we have always remained positive in a negative world, overcame those disappointments, and stayed the course – for both your sake and ours.

This evolutionary process established Spearhead Media Pvt. Ltd also helped establish the company’s other media products – www. newskannada.com, a Kannada news portal, (newskarnataka was transformed into an English news portal in March 2013), Karnataka Today, a monthly English all colour English feature magazine launched in 2015, NK + a bilingual digitally distributed e-magazine targeting the youth of the state, NKTV on the YouTube platform for infotainment shows, NKLive to cover live events, e-learning platform, verdevice – design and digital media hub, Village TV, a social initiative and SAAMS, a media study centre. It must; we live in a dynamic, volatile world… especially in the media industry – but I will come to that later. There is no doubt, with India ranking 142 out of 180 on the freedom of the press index developed by the Media Watchdog Reporters Without Borders, the need of the hour for India is free, fair, non-hyphenated and questioning journalism as the country faces multiple challenges. But can the media as it exists today, in its current environment provide it?

The media industry, all of it, but especially the news media is in a crisis of its own. Dropping revenues has forced brutal layoffs and pay cuts. Advancing technology is changing reading modes and habits. Information exchange is instant as is opinion formation. The best of leather and investigative journalism (ground-level reporting) is shrinking, yielding to crude prime-time spectacles that create a pre-determined and agenda-based narrative, rather than provide both sides of a story and its back story for informed decision-making – a journalistic maxim that has long been forgotten in the quest for eyeballs and its by-product, advertising revenue!

Be that as it may, it has been 9 years since we started out. We sat down yesterday to count our blessings and enumerate our challenges – the blessings of wonderful, talented, loyal stakeholders, and gifts of integrity, resilience and perseverance amongst our team and we were grateful.

We then also listed our challenges –  compliance with the newly issued regulations for digital media that could turn out to be a Damocles sword if applied selectively; a  drop in advertising – the market all but collapsed after series of financial reforms and this has been compounded by the COVID lockdowns; the availability of appropriate human resources – which must be consistently paid a fair wage for fair talent; grabbing and retaining eyeballs, in the face of fierce competition from digital websites, both national and local, and of course social media and other news aggregators.

What is required? An enduring USP

Each one of us in the industry must have a USP to sustain through the climate change – from print to radio to TV to digital Media to Social Media to OTT platforms that are taking the Visual Media Market by storm.

Fortunately, from the start, we have had one – truth endures – and it has helped us endure over time. But the future may not want the truth as we see it, but as they see it and that will be the greater challenge. Short and quick reads with headlines that say it all. After all, who is interested in the detail of why the dog wagged its tail? That it wagged will be sufficient. For the rest, we can form our own conclusions, based on our perception of the event, which in turn is based on our experiences, mindset and inherent biases’!

What then should we publish?

There is another more serious challenge that all of us in the media industry (other than social media which is populated through influencers) face in our race to grab eyeballs and keep them – What to publish and what not to.

Man lives by his senses and emotionally drawn to anything that tickles his senses – what does that? Fear, conflict, negligence, the unusual, David vs Goliath scenarios, failure, exercise or lack of exercise of power, comparisons, and listicles that feature the best and the worst in the world and us. Reporting these events are the new normal, while the triumphs of kindness and love of the normal kind, resilience in the face of adversity, innovation for a better and sustainable tomorrow for the next generations, alternative maps of development and people power are often ignored.

Given the realities of our times, it is best to have a balance. And newskarnataka.com has been trying to do just that – the evidence is in our special section – the regular columns that focus on travel, women, humour, health and wellness, and the best of human nature.

The future as we see it

Your favourite media group is looking to consolidate its presence in the market over the next five years – through new visually impressive, interactive, and responsive websites, a more attractive Karnataka Today magazine with more subscribers for both print and its revamped e-edition, better and more programming on its web channels, an exclusive OTT platform and more effective presence on social media which is evolving by the day. It will also look to comply with all regulations that are thrown at it, and weave a fabric of news, views and visuals that will keep all Kannadigas, wherever they may be warm, involved and committed to our beautiful state.

Miles to go before sleep and let’s walk together to rededicate newskarnataka.com as Peoples’ Media!