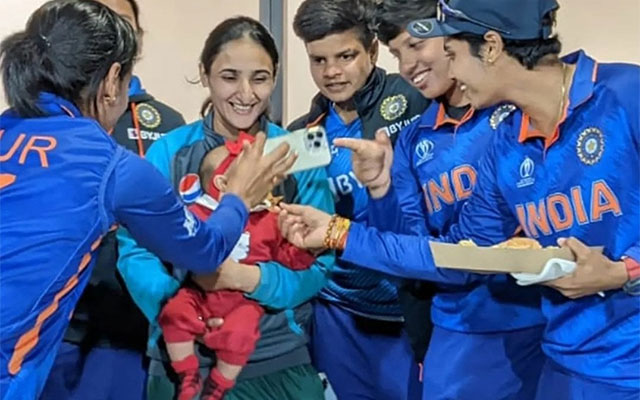 Mount Maunganui: India’s 2022 Women’s World Cup campaign got off to a brilliant start on Sunday as they thrashed Pakistan by 107 runs here. After the game, the two teams shared a heart-warming moment when the Indian women gathered around Pakistan skipper Bismah Maroof’s seven-month-old daughter Fatima.

India’s friendly interaction with Fatima has won the hearts of many cricket fanatics from both nations. The video of some Indian players enjoying their time alongside Fatima’s daughter has also gone viral on social media and was also posted by the International Cricket Council (ICC) handle.

“Little Fatima’s first lesson in the spirit of cricket from India and Pakistan,” the ICC wrote on Twitter.

Earlier on Sunday, a fighting batting effort followed by a clinical bowling performance helped India thrash arch-rivals Pakistan by 107 runs in their opening match of the 2022 ICC Women’s World Cup at the Bay Oval.

With this win, the Indian women’s team maintained its unbeaten record against Pakistan. They have played 11 matches and won all so far.

In reply, none of the Pakistan batters could score big and their team was bowled out for 137 in 43 overs, losing by a huge margin of 107 runs. Opener Sidra Ameen (30 off 64) and Diana Baig (24 off 35) were the highest scorers for Pakistan while Rajeshwari Gayakwad (4/31) was the most successful bowler for India.