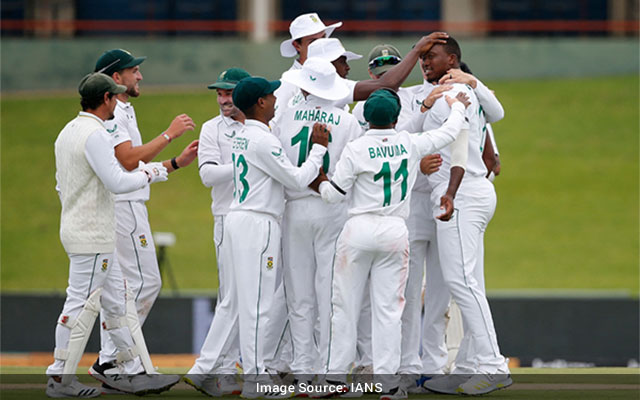 Centurion: Cricket South Africa (CSA) on Sunday mourned the passing away of Archbishop Desmond Tutu. Tutu, a world-renowned anti-apartheid activist, passed away at the age of 90 in Cape Town on Sunday morning.

“Cricket South Africa (CSA) has learned with sadness and a feeling of a tremendous loss of the passing of Archbishop Emeritus Desmond Tutu, this morning. CSA sends its condolences to the entire Tutu family, friends, colleagues, the Anglican Church, and indeed to the whole of South Africa,” said a statement from CSA.

As a mark of respect, the South African team wore black armbands on day one of the first Test against India at SuperSport Park. “Archibishop Tutu departs these shores having made an indelible contribution in the struggle against the unjust and criminal system of apartheid. He dedicated his entire life to the project of healing and reconciliation for our nation, a process he carried through even beyond his chairmanship of the Truth and Reconciliation Commission in the 1990s,” added CSA.

Both India and South Africa, with everyone in the stadium, also observed a minute’s silence before the national anthems. “Cricket benefitted immensely from his heroic efforts, as it ushered in a new era of unity, embodying God’s rainbow people. He passes on, on a day that South Africa and India commence a Test series, which also marks the 30th Anniversary of South Africa’s readmission into international cricket after our period of isolation from international participation.”

Apart from the South Africa team, the umpires Marais Erasmus and Adrian Holdstock were also spotted wearing black armbands. “This makes the Archibishop’s passing a very painful loss to CSA, as his activism and teachings helped in transforming the sport of cricket. CSA is delighted that the Archibishop was an avid cricket fan, and yet another of the great Sons and Daughters of our soil that we have lost this year.”

See also  It was CA's decision to not put Paine's investigation in public domain: Taylor

Known for his work as an anti-apartheid and human rights activist, Tutu was conferred with the Nobel Peace Prize in 1984 for his opposition of apartheid in the country through non-violence. He also coined the term ‘Rainbow Nation’ to describe South Africa post-apartheid, after South Africa’s first fully democratic election in 1994 saw Nelson Mandela being elected as the President.

“There are just a handful of people who have made a greater contribution to our democracy, the reconciliation project and indeed the difficult times of transformation and the unification of sport and in particular cricket in South Africa than our beloved and much respected Archibishop Emeritus Desmond Tutu,” said CSA’s Acting Chief Executive Officer Mr. Pholetsi Moseki.

Coming to the match, India are 272/3 in 90 overs at end of day one with KL Rahul carrying his bat through the day for an unbeaten 122 with Ajinkya Rahane giving him company at 40. Mayank Agarwal made a fluent 60 while captain Virat Kohli chipped in with 35. For the hosts, Lungi Ngidi was the only wicket-taker with 3/45 in 17 overs.