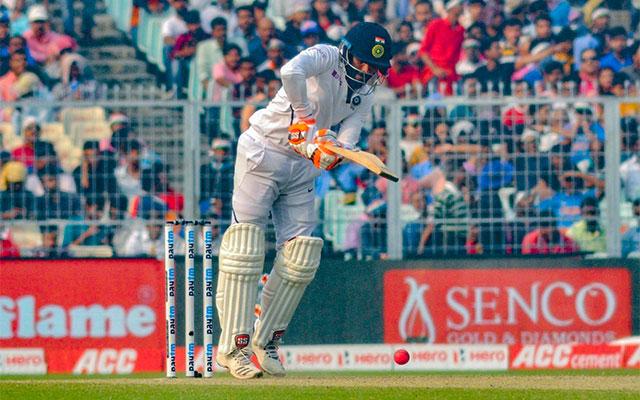 Bengaluru: India will be looking for some valuable World Test Championship (WTC) points when they begin their campaign in the Pink Ball Test against Sri Lanka at the M. Chinnaswamy Stadium here later on Saturday.

Australia, following their massive Ashes victories, are leading the table with 77.77 percentage points, followed by Pakistan and Sri Lanka.

For a team that’s undergoing transition, India made a massive statement of intent under the new Test captain Rohit Sharma with a dominating victory by an innings and 222 runs in the first Test in Mohali. While it consolidated India’s fifth position in the WTC standings, they will be looking to move further up with a win in Bengaluru.

Ravindra Jadeja was the star of the show with an unbeaten 175 in the first innings, which was followed by nine wickets in the next two innings. The all-round brilliance helped the southpaw scale to the top of the ICC Test Rankings for all-rounders.

India have made one change to the squad with Axar Patel replacing Kuldeep Yadav. Patel, who last played against New Zealand in November, has recovered from shin injury as well as COVID-19 and could slot right into the playing XI in place of Jayant Yadav.

Sri Lanka will be looking to bounce back after a crushing defeat in the first Test. The bowlers looked hapless when asked to bowl first and the batters too looked off-colour, with only two half-centuries in the whole match.

The two positives for Sri Lanka were the Pathum Nissanka and Niroshan Dickwella, who scored half-centuries. Skipper Dimuth Karunaratne will have to lead from the front with the bat, especially after an injury has ruled Nissanka out of the second Test, and hope the other pieces fall in place if they are to break their Test hoodoo in India.

The Test will be Suranga Lakmal’s final game for Sri Lanka and the Islanders will be hoping to give the veteran bowler a farewell to remember.

In the previous Test at Mohali, Jadeja’s 175 not out and half centuries from Rishabh Pant (96) and Ravichandran Ashwin (61), helped the hosts post a massive 574/8 before declaring. In reply, Sri Lanka were bowled out for just 174, with Jadeja leading the way with a five-for.

Asked to follow on, the tourists could manage only four better from their first innings total, thanks to Niroshan Dickwella’s unbeaten 51. For the hosts, Jadeja and Ashwin picked up four wickets, with the latter going past Kapil Dev to become India’s second-highest wicket-taker in Test cricket.

In the end, the spin twins proved to be too hot to handle for the visitors as India walloped Sri Lanka by an innings and 222 runs.

“It all depends on the individual. Pink Ball looks different, the speed at which it comes to you on the field and the amount it moves or spins is also different. Also timings for the day-night Test are also different, so the ball might not do so much in the first session but might start to do more under the light. We have played the Pink Ball Tests on all different surfaces, so there are no set parameters for it,” said India vice-captain Jasprit Bumrah ahead of the Pink Ball Test.