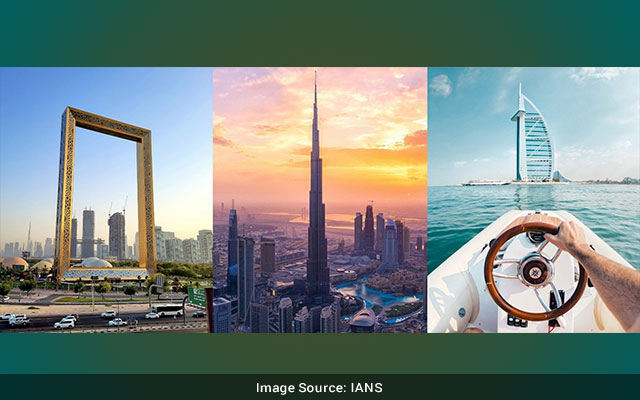 Dubai: India spinner Varun Chakravarthy was asked to make “strange comparisons” on Friday but the architect in him didn’t let him down even for a moment as the 30-year-old played the googlies and the flippers thrown at him with panache to come up with truly entertaining answers.

Asked to compare his India team-mates, currently playing in the ICC T20 World Cup here, to iconic buildings in the UAE, Chakravarthy — who has a bachelor’s degree in architecture but gave up his job as an architect to pursue cricket professionally — compared the Burj Khalifa building here with India skipper Virat Kohli.

“Burj Khalifa… That’s the tallest building in the world. (Comparison-wise) it has to be Virat Kohli. He’s the biggest one, the captain of the side. Also because of the number of runs he has scored,” said Varun Chakravarthy.

The spinner compared the iconic Burj al Arab building, designed like a ship with sails, with ‘Captain Cool’ Mahendra Singh Dhoni. “It’s a really cool building in the sea (much like MSD).”

For Hardik Pandya’s “blingy” style of dressing, Chakravarthy compared him to the iconic Atlantis hotel building. “It has to be Atlantis… very blingy, blingy hotel. Pandya wears lots of bling stuff. I’ve been with him for one tour and he likes to dress up nicely.”

As for India’s pace bowler Jasprit Bumrah, Chakravarthy, in a video posted by the ICC on social media, compared him to the “Dubai Frame” building, an architectural marvel, designed like a rectangular photo frame towering over several skyscrapers in the city.

“The middle stump is missing, the base is intact. So, it has to be Jasprit Bumrah,” said Varun Chakravarthy.

For Rishabh Pant, Chakravarthy found the twisty Cayan Tower the most suitable building worth comparing the wicketkeeper-batter to. “I’ll go with Rishabh for the Cayan tower because he twists himself when he plays the slog sweep… that’s how he looks playing that shot.”

Chakravarthy then went on to compare the “Museum of Future” building with Suryakumar ‘Sky’ Yadav because “when he expresses himself, he’s a treat to watch”. He then compared the Aldar Headquarters building in Abu Dhabi — a fully-glazed structure completely circular in elevation and curved in all other directions — with India pace bowler Md Shami, “because when he bowls, he presents the seam as straight as possible like this one (building)”.

Last but not the least, when Chakravarthy was shown the image of an under-construction building next to the Cayan Tower, he quickly pointed out that it looks like someone “probably trying to make a career (in cricket).”