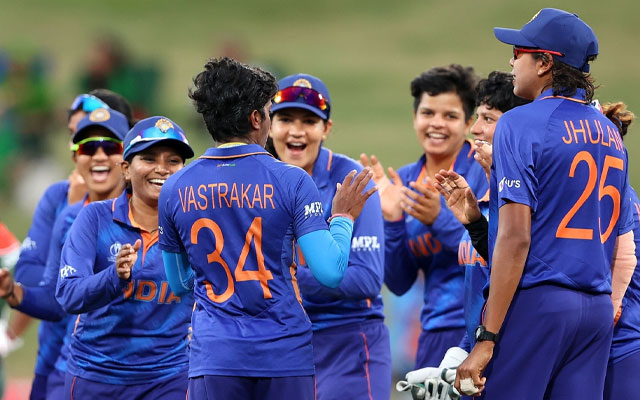 Christchurch: India will be banking on an all-round show as they face South Africa in their final league match to seal their spot in the semi-finals of the ICC Women’s World Cup.

It has been a rather up-and-down campaign for India in the Women’s World Cup tournament. In one match, they are a winning side but in the very next game, they end up as the losing team. Sample this: against West Indies, they made 317 and won by 144 runs. In the very next match against defending champions England, they were all out for 134 and lost by four wickets.

In India’s batting at the Women’s World Cup, losing wickets in clusters has become a regular occurrence. Against Pakistan, they were 114/6 before Sneh Rana and Pooja Vastrakar saved the day with a 122-run partnership. When facing New Zealand, they were 95/5 and eventually lost by 62 runs. India was 78/3 against the West Indies before Mandhana and Harmanpreet Kaur slammed centuries.

When facing England, India were tottering at 86/7 and were bowled out for 134. Against Australia, they lost two wickets within the first 10 overs and two in successive overs in the last ten stage. When facing Bangladesh, India slipped from 74/0 to 74/3 and were 108/4 before Yastika Bhatia and Sneh Rana staged a rescue act.

“With such a very crucial Women’s World Cup game tomorrow, everyone in the team knows their roles. All in the team are ready to give their 100 percent. Whenever someone goes out to bat, we always think of creating partnerships and take others along with you and back each other all the time in batting. I just hope that we get good partnerships tomorrow as a batting unit. Our bowling and fielding units have also got a lot better. We have been improving as a team,” were Shafali Verma’s words on batting improvements in the pre-match virtual press conference.

Shafali, out of the eleven after scoring a duck against Pakistan, came back against Australia and showed glimpses of shrugging her poor form by making a stroke-filled 42 against Bangladesh. Smriti Mandhana has looked good at the crease but will want to bat for long. Yastika Bhatia has been a solid performer for India, notching up half-centuries at three.

Ideally, India would like for runs to flow from Mithali Raj’s bat. The skipper, one of the most experienced players in the side, hasn’t been at her best self with the bat, barring the half-century against Australia. Her deputy, Harmanpreet Kaur, has been consistent with the bat and with Pooja Vastrakar and Sneh Rana, has been leading India’s charge with the final ten overs.

Their bowling attack, which took a beating against Australia, bounced back strongly against Bangladesh. But India might be tempted to bring in pacer Meghna Singh for leg-spinner Poonam Yadav due to the Hagley Oval’s nature of helping the fast bowlers. They will also be buoyed by the fact that South Africa haven’t been at their best while batting against spin, something which all-rounder Chloe Tryon touched upon.

“We know we want to try to take the strike as much as we can and I felt that we haven’t done enough of that and not just against India. If you look at other teams that we have played. We also struggled a little bit against Bangladesh and Pakistan and so it’s just making sure that we’re still ticking that scoreboard over and not trying to get into two minds. We are at the business end of the World Cup now and we don’t want to be eating up too many dot balls.”

Opener Laura Wolvaardt has been the most successful Women’s World Cup batter for her team, making 353 runs and is the second-highest run-getter in the tournament. Wolvaardt has made four successive half-centuries but is yet to reach the three-figure mark. Her partner, Lizelle Lee, has not been at her dominating self while South Africa still haven’t solved the toss-up between Tazmin Brits and Lara Goodall on who bats at number three.

Captain Sune Luus has got three fifties while Marizanne Kapp has been chipping in with crucial wickets and match-winning cameos. Mignon du Preez showed signs of coming back to form with an unbeaten 38 in a rained-off match against West Indies. In terms of bowling, Shabnim Ismail, Ayabonga Khaka and Masabata Klass provide enough ammunition with fiery pace.

If there was an occasion where India would like for their batting, bowling and fielding to click in unison, then the do-or-die match against South Africa is the one, especially with a semi-final berth on the line.