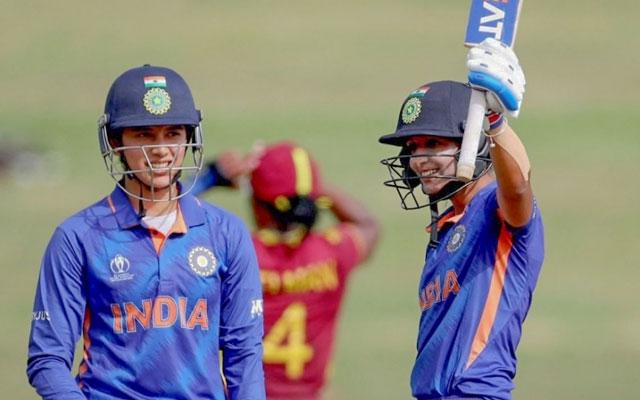 Hamilton: Smriti Mandhana and Harmanpreet Kaur notched up centuries as India posted a mammoth 317/8 in 50 overs against the West Indies in their third match of the ICC Women’s Cricket World Cup at Seddon Park on Saturday.

Apart from their knocks of 123 and 109, Smriti and Harmanpreet were also involved in a 184-run stand. It was a free-flowing batting performance from India where they were proactive in power-play, had the intent to rotate the strike in middle overs and when it mattered the most, got the big knocks as West Indies bowlers were punished for their wayward line and length.

Mithali Raj’s decision to bat first on the pitch which was used in their 62-run loss to New Zealand was validated early on by Yastika Bhatia’s 21-ball 31. After getting her first boundary with an outside edge flying over slip, Yastika pulled Chinelle Henry thrice in the arc from deep mid-wicket to backward square leg.

The pull continued to be a great scoring shot for Yastika as Shamilia Connell was taken for fours through mid-wicket and square leg. Yastika’s knock came to an end when she chipped a cutter from Shakera Selman back to the bowler.

Mithali’s promotion to three didn’t go well as she closed her bat face too early and chipped straight to mid-on off Hayley. Deepti Sharma took two boundaries off Shakera but fell to Anisa Mohammed while trying to slog sweep, and Hayley at first slip took a one-handed stunner to her right at slip.

On the other hand, Smriti took her time before driving Shamilia through cover and lofting Hayley Matthews over mid-off. Harmanpreet began by using her feet against Anisa for two boundaries through off-side and began to rotate the strike with Smriti starting to get her groove.

The duo ran exceptionally between the wickets and easily rotated the strike while finding delightful boundaries in between.

As Smriti and Harmanpreet’s partnership began to grow, West Indies began to fumble in the field. Misfields, dropped chances and missed run-outs began to creep in as Smriti got some luck on her side in nervous 90s.

Smriti then reached her century with a pull through square leg off Hayley. Hayley came under further attack from Smriti as she slammed a hat-trick of boundaries.

Though Smriti found deep mid-wicket on the pull off Shamilia, Harmanpreet hit Deandra Dottin for a four and six and reached her century with a single through long-on.

Harmanpreet fell in the 49th over as the outside edge on the paddle went to the keeper. Pooja Vastrakar, Richa Ghosh and Jhulan Goswami fell in quick succession but India had crossed the 300-mark by then.