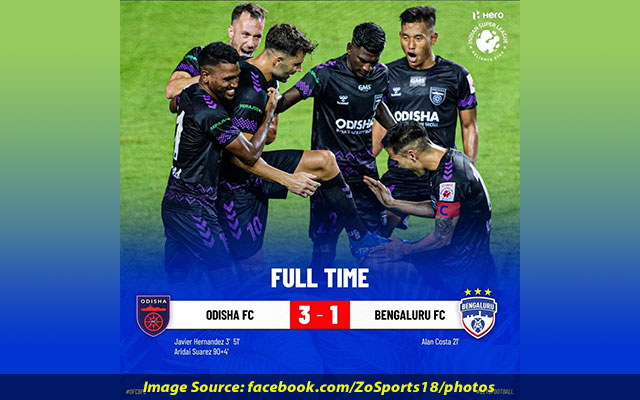 Vasco, Goa: Coming on the back of a win, the blues look raring to go as they faced opponents Odisha FC. However, right in the 3rd minute, a mistake at the back meant that Odisha took the lead in the early minutes of the game, through Javi Hernandez.

In the 19th Minute, after a few missed headers, close calls and great saves from the defence, Alan Costa managed to free himself from his marker and score a clean header onto goal, bringing parity to the scoreline.

After that, however, up unto halftime, the match was pretty much even stevens, with both sides keeping a tight defensive line.

In the 50th minute, a missed backpass by Udanta led to a free-kick, which in turn was beautifully taken directly by Javi again beating an outstretched Gurpreet, making it 2-1 in favour of the home team.

In the 61st minute, chaos ensued as BFC were given a penalty, but Sunil Chhetri who rarely misses, managed to miss it this time, with the keeper guessing right and saving the shot. However, on the rebound Cleiton scored, only to have it ruled an encroachment by the referee, much to the anger and shouts of the BFC players, which however went in vain.

Akin to the first half, the next 30 minutes of the second half were pretty uneventful. However, things were soon to take a turn when the referee added 5 minutes as injury time.

BFC’s woes continued onto the added minutes of the second half, with Aridai showing some intense footwork and skills to beat the lone Pratik in defence and Gurpreet on goal.

Javi Hernandez was adjudged Man of the Match