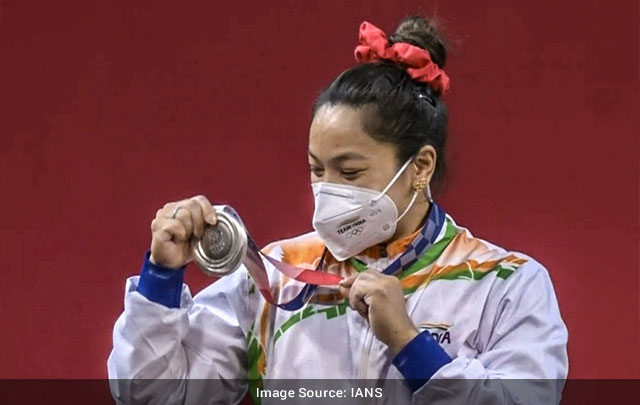 Mumbai: When Olympic silver medallist weightlifter Mirabai Chanu returns home from Japan on Monday, she will not be allowed to board her flight from Tokyo unless she carries her latest Covid-19 test (RT-PCR) report as a mandatory requirement for all travellers from Japan.

Considering the difficulties in getting the Indian athletes out of the bio-secure bubble of the Olympic Village or hotels where they are staying and getting the Covid test done at a private lab as a nation-wide emergency is imposed in Japan, the Indian Olympic Association president, Narinder Batra, has asked the Indian government to give a one-time relaxation in the rule.

He has requested that athletes and officials returning from the Olympic Games to be given entry into the country without the mandatory test.

Batra requested that a letter be sent to the government of Japan to permit athletes and officials competing at the Olympics to board the flights to India without a Covid test.

Batra has addressed his request to Sports secretary Ravi Mittal to intervene with the officials concerned to allow athletes, officials and media representatives to enter the country without an RT-PCR test. “The IOC-issued accreditation card for the Tokyo Olympic Games could be considered as proof of their involvement with Olympics work,” Batra said.

“To get RT-PCR test done in Tokyo or outside Tokyo, where (the) contingent is based, is a very difficult task. Here paperwork is perfect but in practice, there is a lot of confusion and very difficult to get things,” said Batra.

“Our humble request from Tokyo through your office is to kindly take it up with Ministry of Health, Government of India, Disaster Management and whoever else handles this with a request to allow the athletes, the officials, the IOA officials, IOA delegates, NSF (National Sports Federation) officials/delegates and the press & media, who are coming back from Tokyo and have an accreditation card — based on which Japan allowed them entry into Japan — be allowed to enter back in India without RTPCR test and report,” said Batra in his request.

Batra said that the athletes and officials are “double vaccinated” and have “taken two RT-PCR tests before departure to Tokyo” and are in a bio-secure bubble in Tokyo.

“Every member of the contingent, officials, delegates from IOA and NSFs are being tested in Tokyo every day for Covid with salvia test till each individual’s departure back to India.”

He requested the government that the returning athletes be permitted to go through without waiting for the Covid test. He said a letter should be issued to the airlines carrying travellers to India from Japan.