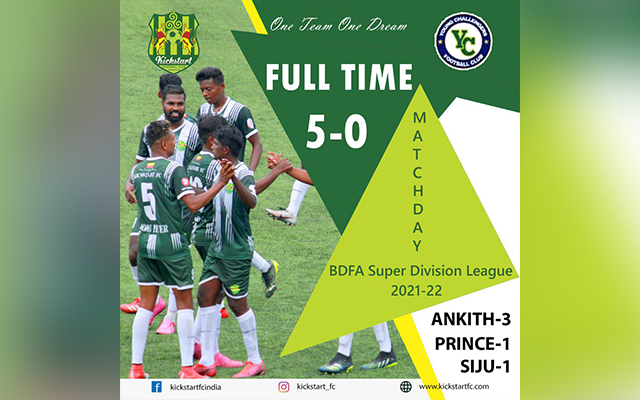 Bengaluru: In the 2021 – 2022 BDFA Super Division League, Kickstart FC’s Ankith scores hattrick and won the match against Young Challengers FC in Bengaluru on Wednesday October 27. The match score was 5-0.

Shekhar Rajan, Founder of Kickstart Foundation said, “This has been a good beginning for Kickstart. The players played as team and we combine very well. Ankit did a hattrick and he is a Karnataka boy.”

He also added that as a team, they play a very different and attacking style of football with European touch. Coach Laxman does a different style and approach resulting in their excellent performance in the ground.

Bengaluru FC, the former champions, were held to a 1-1 tie by Bangalore Dream United, while Thancos Students FC drew 2-2 with Kodagu FC.